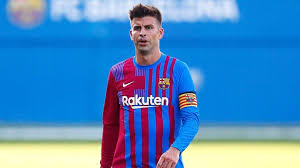 Gerard Pique, a long-serving Barcelona defender, has stated that he would rather die than join Real Madrid.

Pique believes it is impossible for him to join Real Madrid.

He made the remarks ahead of Barcelona’s LaLiga match against Real Betis on Saturday, December 4.

When asked what it would take to convince Pique to join Real Madrid, he said on the Spanish television show El Homiguero, “It’s absolutely impossible.”

“There isn’t anything. “I’d rather die than go to Madrid,” he added, smiling.

‘We’re the monkeys, so no one respects AFCON’ – Evra on Ballon d’Or positions

Thu Dec 2 , 2021
Spread the loveTweet Ex-Manchester United star Patrice Evra believes the Africa Cup of Nations (AFCON) deserves more respect than the competition is currently getting. The 40-year-old said this in relation to the positions of African footballers at the 2021 Ballon d’Or awards. Lionel Messi picked up his seventh Ballon d’Or on […]