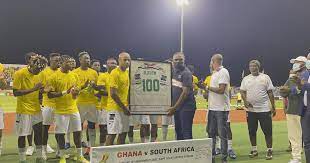 The 31-year-old now joins Asamoah Gyan as the only two players who have played a century of matches for the Ghana national team.

Gyan, who also captained the Black Stars until 2019, is currently Ghana’s most capped player with 109 matches under his belt.

The Al Sadd forward converted from the penalty spot in the first half to ensure Ghana qualified for the play-offs of the World Cup qualifiers.

The Black Stars finished Group G with the same points as South Africa, but edged Hugo Broos’ side due to a superior goals scored.

The Ghana Football Association (GFA) and the Ministry of Youth and Sports celebrated Ayew for reaching his latest milestone.

He was honoured with a special customised Ghana jersey with his name and the number 100 inscribed on it.

The former Swansea City and West Ham man has scored 22 goals for the national team since making his debut in 2007.

He is also currently Ghana highest scorer in the history of the Africa Cup of Nations (AFCON) with nine goals.

Mon Nov 15 , 2021
Spread the loveTweetHeadaches are a very common form of pain and can be a nuisance when someone has one. Rather than reaching for over-the-counter painkillers, there are many natural methods that people can try to help them get rid of a headache. Here, we look at a range of home […]