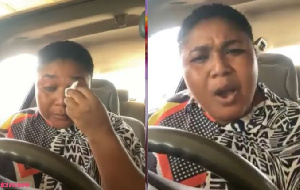 Actress and TV personality Xandy Kamel has been spotted at the Kotoka International airport leaving the country to probably cool off weeks after her divorce saga inundated social media.

In a fresh video shared by IG blogger Aba the Great, Xandy who was seen wearing nose masks, dragged her two travelling bags while getting ready to board a plane.

Aba shared the video writing; “Xandy Kamel spotted at the airport, traveling out to go cool off ???????? luxury life after separation Dey be ruff… @xandykamel make sure you grab one fine dude during your vacation wai… it’s very necessary ????????????????”

Recall that Ghbase previously shared a new update on Xandy’s issue which took a new dimension narrated from the perspective of an insider.

A lady who claimed she worked with the embattled actress and TV personality at Angel TV has revealed some shocking details about Xandy and circumstances before and after her marriage developed cracks.

Amongst some of the salient things she dropped was the fact that before Xandy and Kaninja got married, he was in a serious relationship with another woman but Xandy said as long as she’s an Ewe from the Volta Region, she’ll use all means (fair or foul) to make him her bona fide property.

In her words, she said,

“Xandy brought her marriage issue so I can comfortably release every secret I know about them. I lived and worked with them at Angel. I can confidently say that Xandy Kamel hooked up Kaninja with money. Kaninja was having somebody serious but Xandy Kamel promised herself that as an Ewe from Volta Region, she will use all means to take Kaninja. I can’t confirm that she used juju. I don’t know about that. I’m here to say what I know” Ohemaa explained.

See also  WATCH : I'm just like wow!’ - Tiwa Savage on receiving her own sextape from blackmailer

“I can confidently add that Xandy sponsored their wedding. If the expenses were GHC10,000, Xandy paid 90% of it” The Former Angel TV Presenter added.

“In all, Kaninja is a miser. He doesn’t give money to women. He takes advantage of them. What he did to Xandy is not different.

“I know that Kaninja left Xandy about one month ago. Yes, the marriage started collapsing some months ago however it has now come to the public domain. Xandy has gone through a lot. She should stop accusing people and analyze herself for solutions,” she concluded.

Mon Nov 15 , 2021
Spread the loveTweet Ghana captain Andre Ayew marked his 100th international appearance during Sunday’s World Cup qualifier against South Africa. The 31-year-old now joins Asamoah Gyan as the only two players who have played a century of matches for the Ghana national team. Gyan, who also captained the Black Stars until […]