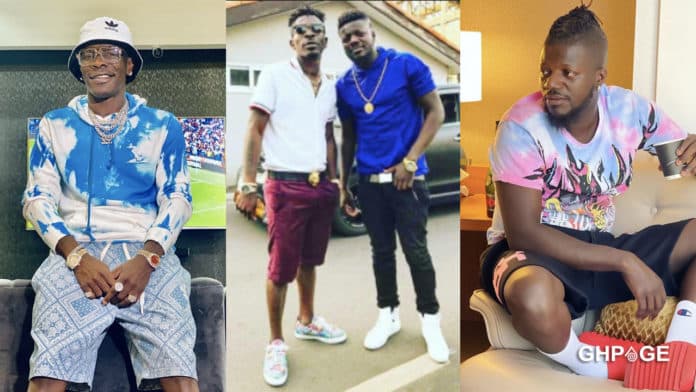 The boss of Asuoden Music Pope Skinny has begged Dancehall artiste Shatta Wale to let go of the past and let them become friends once again.

The two close friends had a falling out after the SM boss announced on his Facebook page that Pope Skinny and others were no longer on his team.

Pope Skinny reacted strongly to Shatta Wale’s statement by throwing some barbs at him and revealing some secrets about the award-winning Reggae/Dancehall musician that many people were unaware of.

Despite the fact that this has been going on for a while, the former Adom FM ‘Kasahare’ show host has finally taken steps to bring the two parties together.

Pope Skinny recently requested Shatta Wale to forget about everything that happened during their feud so that they can reconcile and become friends again since people liked them the way they were.

Pope Skinny said: ‘‘Wale, let us forget everything, the way we were was admired by many, what one person has said or not said does not matter, if within your heart you believe I have not done anything bad against you, I feel the same way. Let’s cut things short and go back to being friends.”

Shatta Wale is yet to respond to Pope Skinny.

Tweet
See also  Yawa? Watch Video Of The Hilarious Moment Ali Dropped Shemima Like A ‘Bag Of Rice’ And Ignored Her Live On TV During TV3’s Date Reunion – Video

Wed Sep 8 , 2021
Spread the loveTweet A video clip showing two young women ostentatious parading themselves on camera as lesbians has hit the internet space. In the video sighted by GHPage.com, the couple who seemingly live a carefree life of sexual immorality are seen puffing smoke from what looks like a roll of weed […]