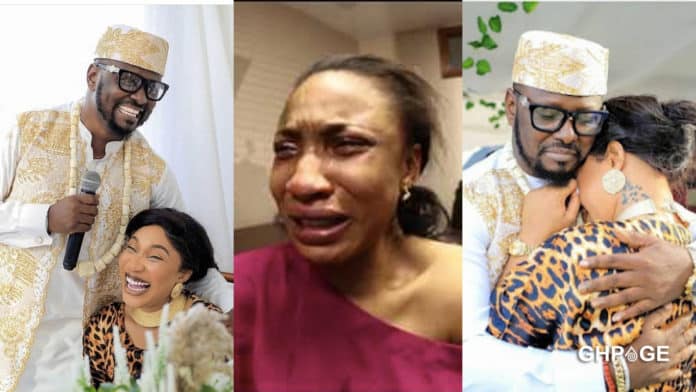 Nollywood actress Tonto Dikeh has been in a back state this past few days after her three-month-old relationship with boyfriend Prince Kpokpogri ended in tears.

After the break-up, a lot of allegations were made against the actress by Prince on his social media handle a move which has been described as foolishness on his part.

In a new development, an audio recording has surfaced on social media that involves the two former love birds in a conversation.

In the tape that was posted online, Prince is heard chastising Tonto Dikeh for causing a problem in their three-month romance.

” from day I I told you I cherish my peace and if anything threatens my peace, I’ll walk away. As soon as you see me any lady you assume it’s my girlfriend and start overreacting. I love my peace and I don’t want to die young”, Prince Kpokpogri is heard saying in the audio.

Tonto from the audio became speechless and started shedding tears.

Listen to the full audio below:

Hope the two settle things between themselves fast so they can come back together.

VIDEO : Pope Skinny calls for peace between him and Shatta Wale

Wed Sep 8 , 2021
Spread the loveTweet The boss of Asuoden Music Pope Skinny has begged Dancehall artiste Shatta Wale to let go of the past and let them become friends once again. The two close friends had a falling out after the SM boss announced on his Facebook page that Pope Skinny and […]