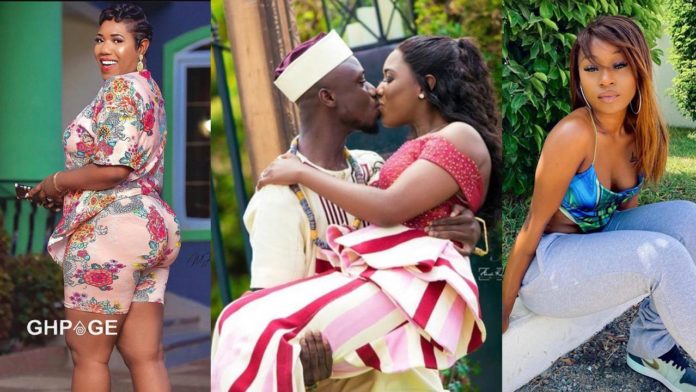 There is a serious beef brewing between two of Ghana’s Slay Queens, Efia Odo and Victoria Lebene, the wife of blogger Nkonkonsa. It’s so wild Efia Odo has made allegations of hookup against Nkonkonsa’s wife.

According to Efia Odo, Victoria Lebene has no moral right to chastise and act all holy just because she is married now because she was a hookup girl and even attempted to initiate her into the business.

Efia Odo claims Victoria Lebene told her the client was willing to pay $2,000 for a night but she turned Lebene and her client down because she does not do hookup.

It all started when Victoria Lebene after the #FixTheNation demonstration led by Efia Odo attacked Efia Odo and other convenors of the movement.

Lebene asked them to fix themselves by starting to dress appropriately in public and on social media to promote sanity. Although she didn’t mention Efia Odo’s name, it’s only a blind person who will not know it’s a shot directed at Efia Odo.

She wrote: “Don’t say fix and not fix yourself! Change starts with us the youths. The old folks will leave, and when we hold the fort, we will account to everything we do!. COURSE- Means the Direction, Route, Way, the journey! read and research on things before your comment. THANKS!,”

Well, like stated earlier. Efia Odo did not hold back in her reply at all. Efia Odo said Victoria Lebene being a prostitute will not be deleted just because she got married.

See also  Do you and forget what others say – Maame Serwaa

Well, the battle has just begun. Let’s see how it ends.

Mon Aug 9 , 2021
Spread the loveTweet• Four former top officials of the ruling NPP have no status in the party • The four include Nyaho Tamakloe, Wereko-Brobbey, Sammy Crabbe and Paul Afoko • The quartet have been suspended at different times for breaching party rules Four former leading members of the ruling New Patriotic […]