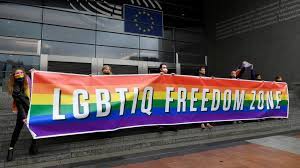 • Lawmaker, Sam George, is leading the effort to pass the Bill

The Ghana Christian Council has said it is fully behind the pending Human Sexual Rights and Ghanaian Family Values Bill 2021, before Parliament.

According to the Christian Council of Ghana, it has keenly followed and participated in the debate on “The Promotion of Proper Human Sexual Rights and Ghanaian Family Values Bill, 2021” hence its support.

“The Council wishes to state unequivocally, that it supports the Bill and prays that it will see the light of day. We are ready and willing to participate in the consultative process to make the Bill worthwhile,” a statement signed by the General Secretary of the Council, Rev. Dr. Cyril G.K. Fayose, read.

The issue of gay rights in Ghana has gotten intense with several people against the movement. Eight lawmakers are behind the Bill which would impose a 10-year imprisonment on advocates of same-sex and gay rights. The LGBTQ Community in the country has called for global help over anti-gay Bill.

‘They can go to hell’ – NDC MP slams pro-LGBTQ+ diplomats

Defending its stance on the controversial matter, the Council quoted some memory verses from the Bible noting that homosexuality breeds no space for procreation and attracts the wrath of God.

See also  Airlines that bring unvaccinated persons into Ghana will be surcharged $3,500 per passenger

“We wish to again affirm that marriage is a union between a man and a woman (Genesis 2:24). Homosexuality is therefore a redefinition of the family system other than what God intended when He created humankind. It has no space for procreation and nurturing of children with the love of a father and mother. Homosexuality is an act of perversion and abomination and it attracts God’s wrath (Leviticus 18:22; 20:13; Genesis 19:1-28),” the statement copied to GhanaWeb read in parts.

The Christian Council has thus called on the general public to support the Bill “through prayers” and any other means that may be required to “uphold the good family system” inherited from forebears.

Read the full statement below:

Fri Aug 6 , 2021
Spread the loveTweet Victoria Lebene and husband, Nkonkonsa – Efia Odo There is a serious beef brewing between two of Ghana’s Slay Queens, Efia Odo and Victoria Lebene, the wife of blogger Nkonkonsa. It’s so wild Efia Odo has made allegations of hookup against Nkonkonsa’s wife. According to Efia Odo, […]