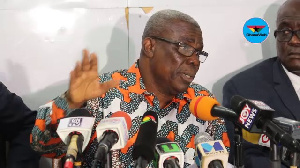 Four former leading members of the ruling New Patriotic Party, NPP, currently have ‘no status’ in the party according to a former national chairman, Peter Mac Manu.

GhanaWeb monitored comments Mac Manu made on the August 8, 2021 edition of Joy News’ ‘The Probe’ programme where he discussed a wide range of issues around the party’s 29th anniversary.

The four have been known to have broken ranks with party positions in the past and have been suspended at a point or the other.

Wereko-Brobbey was a founding member of the NPP back in 1992 but following disagreements, he broke off at a point to form his own party.

He would subsequently return to the fold and lead the Ghana @50 anniversary team under the John Agyekum Kufuor administration. After breaking ranks with harsh criticisms, he was suspended from the party in 2013.

Afoko became the first National Chairman of the NPP to be suspended from his position, years ago. His position was taken over by current chairman Freddie Blay in Acting capacity.

Even though Afoko’s suspension was along with his then General Secretary, Kwabena Agyapong; the latter has been accepted back into the fold for showing good conduct.

Sammy Crabbe a former Second Vice Chairman of the NPP was suspended in 2015 along with Afoko and Agyapong for various acts of misconduct.

He attempted to run for the Chairmanship in 2018 but was disqualified by the party citing the fact that a member under suspension could not stand for elective position, he subsequently withdrew his candidature.

Nyaho Nyaho Tamakloe was also another founding member of the NPP who was indefinitely suspended by the party in 2016.

The suspension was occasioned by a petition presented by a member from the Ayawaso constituency who alleged that actions by Nyaho Tamakloe undermined peace and unity in the party.

But as recently as 2021, Nyaho Tamakloe has insisted that he was suspended becaue he had condemned undemocratic behaviour in the party at the time, he remains an ardent critic of the government and President Nana Addo Dankwa Akufo-Addo.

Mon Aug 9 , 2021
Spread the loveTweet• Koku Anyidoho’s spat with his former boss continues • He claims the General Secretary must be charged for anti-party conduct • The charge relates to Assin North primaries where an ‘ineligible’ candidate was cleared to run on the party’s ticket Koku Anyidoho has alleged that a General Secretary […]