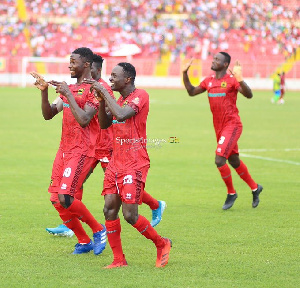 Asante Kotoko SC is happy to have won their first home game at the Baba Yara Sports Stadium against Bechem United on matchday two of the 2021/2022 Ghana Premier League.

The Porcupine Warriors gave their fans a 2-0 victory against the Hunters thanks to two late goals from captain Ismail Ganiyu and striker Samuel Boateng.

Asante Kotoko’s game against Bechem United at the Baba Yara Sports stadium was the first game in over a year as the record holders of the Ghana Premier League played all their home games in the 2020/2021 season in Accra and Obuasi.

This was because of the renovation works that the government was doing at the Baba Yara Sports Stadium in Kumasi.

“This is our City, we’re back together. Thank you for your magnificent support yesterday, Porcupines… Yɛ Yɛ Dɔm!!” the club wrote on their Twitter page after beating Bechem United.

Wed Nov 10 , 2021
Spread the loveTweet Rev Isaac Owusu Bempah and two others who were earlier charged for the threat of death on Nana Agradaa have been re-arrested. They were shortly after they were discharged by the Circuit court presided over by Her Honour Afia Owusua Appiah. This was after the prosecution led […]