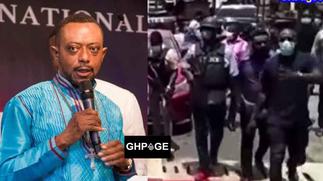 Rev Isaac Owusu Bempah and two others who were earlier charged for the threat of death on Nana Agradaa have been re-arrested.

They were shortly after they were discharged by the Circuit court presided over by Her Honour Afia Owusua Appiah.

This was after the prosecution led by Chief Inspector Dennis Terkpetey prayed the court to discharge them of the earlier charges following the latest developments.

At the last court sitting, their lawyer Garry Nimako Marfo indicated to the court they were going to petition the Attorney General over the manner the prosecution was handling the case.

Apart from this case, Rev Bempah and three others are also facing charges of causing unlawful damage in a different court, a development the lawyers are unhappy about.

By reports that they are currently waiting for the case to be allocated to a court for the new charges to be pressed against them.

Fri Nov 12 , 2021
Spread the loveTweetSyphilis is another serious transmitted disease that has the tendency of becoming deadly if not treated beforehand. As far back 1963, WHO found Lagos to be the highest carrier of gonorrhea in the world. Decades after, it has been made known through available data that the rate at […]