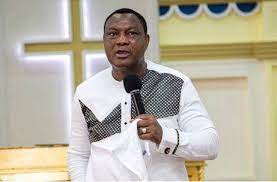 2024 elections is three years away

General Overseer of the Royal House Chapel, Reverend Sam Korankye-Ankrah, has indicated he has been furnished with the divine knowledge about who the next president of Ghana is.

According to the Apostle General, although he has the power of prophesying who the next president is, he wouldn’t abuse such power.

Rev. Korankye-Ankrah said a certain man of God earlier revealed to him during a conversation that his voice is ‘the most authentic voice in Heaven for the nation of Ghana’.

Recounting portions of the conversation to his congregation on Sunday December 12, 2021, Rev. Korankye-Ankrah said “Ladies and gentlemen I can look into your face and guarantee you that the next president of Ghana is in my mouth…We will decide who will control the resources of this nation.

“But one of the very things you should be happy for me is that, I don’t abuse such power and authority. I used them judiciously, very wisely and I am not like those other prophets who just prophecy in a stomach direction manner.”

Expanding further on his divine power, Rev. Sam Korankye-Ankrah added noted that “Anybody who loses elections in this country, I talk to them before they lose…I bring them to my office and I tell them in the coming elections, they will not win. It’s not something I am supposed to say to the congregation because it’s not a good thing to prophecy bad things but I tell them and sometimes they will ask me if there is something I can do about it.”

WATCH VIDEO : Dagbon crisis: ‘Don’t misbehave in front of me’ – What 'livid' Otumfuo told the disputants