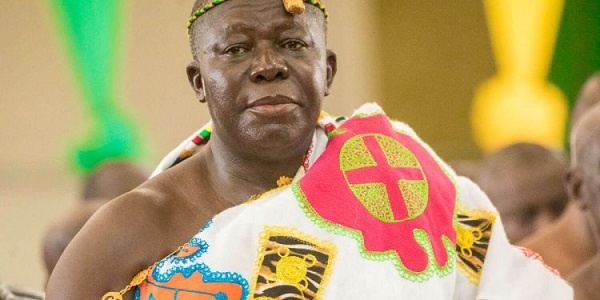 He led the mediation committee

At one the meetings, he warned the parties not to misbehave in front of him

On November 16, 2018, the mediation committee which is being led by the Asantehene finalised its roadmap to the restoration of peace in Dagbon.

The committee’s efforts were crowned with the enskinment of a new Ya Na.

The Asantehene is celebrated as the ‘Pillar of Peace’. This is because he was the intermediary to solving the Dagbon crisis which could have held the country into ransom politically and traditionally.

In one of the meetings with the parties involved, a ‘livid’ Otumfuo Osei Tutu II was seen giving a strong warning stating that none of the party should misbehave in front of him.

“Take my liking you as my children to misbehave in front of me. Now, if the Ya Na was sitting here, you cannot behave like that; so, you don’t do that in front of me. I will that authority and power here and therefore no one…,” Otumfuo warned.

He continued, “Please, let me have the patience as my sons to resolve, try and find solutions to this but I don’t want anyone to take me for granted, no!

“I control the whole of Asanteman and it goes far; I have more than 66 paramountcy’s under me so, please, let me try and find the solution to this. I don’t want anyone to misbehave.

“Let’s be civil, all that we’ve been doing is that because of the way you are comporting the affairs of Dagbon issues that is why we find ourselves in this situation but most of you are not prepared to say the truth. Why can’t this happen in Asanteman because the truth prevails…Dagbon is an ancient Kingdom, I cannot see why the customs and traditions can be manipulated to suit your individual interest.”

“Gentlemen, we’ve been going on and on for the past six years or seven years. This committee has heard it all, we’ve listened to all the arguments. What you’ve been saying on the floor are emotions, they are not factual, they are all emotions…,” Otumfuo Osei Tutu II stressed.

The feud between the two factions of the royal house of Dagbon is said to date back to 1954 with the enskinment of Ya Na Abdullai III as successor to his late father, Naa Mahama Ella I.

As both father and son were from the Abudu line, the enskinment of Ya Na Abdullai III was seen by the Andanis as a breach of a customary understanding or convention that called for succession to the Dagbon skin to rotate between Abudu and Andani.

The rift deepened when, after 15 years on the skin, Ya Na Abdullai III passed away and was succeeded yet again by a son, Mahamadu Abdullai IV, also an Abudu.

That was the third time in a row that an Abudu had occupied the Dagbon skin. With time, Andani feelings of exclusion and grievance grew.

In 1994, the government set up the Ollennu Committee to investigate the Dagbon chieftaincy dispute.

On the basis of the report of the Ollennu Committee, some kingmakers in Dagbon succeeded in de-skinning or removing Mahamadu Abdullai IV.

Yakubu Andani II was then installed as the new Ya Na.

The Abudus, however, refused to recognise Yakubu Andani II as Ya Na, insisting that under Dagomba custom a Ya Na is never deskinned.

In effect, Dagbon now had two royals, one each from the Abudu and the Andani households each holding themselves out as Ya Na although, in official government circles and records.

Ya Na Andani II was the recognised Paramount Chief of the Dagombas.

The death in 1989 of deskinned Ya Na, Mahammadu Abdullai IV, precipitated a crisis.

The Abudus insisted he should be buried at the Ghewaa Palace as a Paramount Chief, and his funeral performed there as well.

Ya Na Andani II and his faction rejected this demand, arguing that as Mahammadu Abdullai lV did not die as a Paramount Chief he was not entitled to be buried in the fashion demanded by the Abudus.

Clashes erupted between the two factions in Yendi, the seat of the Dagbon paramountcy, and soon spread to other major Dagbon towns and cities, including Tamale and Bimbilla.

There was a struggle between the two factions to determine which one actually controlled Yendi, the Dagbon capital. Order was restored only after the intervention of the state security forces.

Sun Dec 12 , 2021
Spread the loveTweetLomanchenko defeats Commey All three judges score in favour of Lomancheko as Commey loses bout Richard Commey apologises for letting Ghana down Ukrainian boxer Vasiliy Lomachenko ordered the corner of Ghanaian boxer Richard Commey to throw in the towel at a point in their bout at the Madison Square Garden in […]