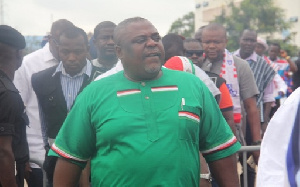 Koku Anyidoho has alleged that a General Secretary of the opposition National Democratic Congress, NDC, must be blamed for allowing a “stranger” to contest a parliamentary primary.

The former presidential spokesperson did not mention which General Secretary he was referring to – be it the national, regional or constituency level scribe.

“What is more anti-party conduct than a General Secretary unilaterally throwing away a petition in relation to dual citizenship & allowing a “stranger” to win primaries only for the Party to be on the brink of losing a Seat in Parliament?” his tweet of August 7, 2021 read.

Anyidoho’s tweet post however be safely linked to issues in Assin North constituency where a Cape Coast High Court has ordered the Member of Parliament, James Gyakye Quayson, to desist from holding himself as a lawmaker.

In the court’s verdict on a petition against the MP, the presiding judge agreed that Quayson was not qualified to contest the election because at the time of filing his nomination, he held dual citizenship.

The embattled MP has since filed an appeal to the ruling and continues to attend to Parliamentary duties pending the hearing of his appeal.

Anyidoho’s reference to anti-party conduct is relative to a terminology that the NDC has used in the last few months to expel three popular members – himself, Allotey Jacobs and Stephen Atubiga.

They have sex in their offices, God will judge the prophets of Ghana - Prophet Kofi Oduro

Mon Aug 9 , 2021
Spread the loveTweet• Prophet Kofi Oduro has lamented about the sins being committed by pastors • He has condemned pastors who have sex with women in their offices • He stressed that God will judge such persons The Bible, in Leviticus 22:32, preaches that man must not bring shame on […]