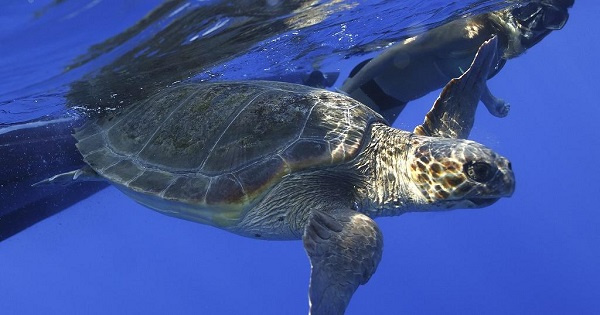 Ribeira da Prata, Cape Verde, 18 Sep 2021 (Lusa) – The zigzagging of tiny turtles looking for the sea through the black sand on the beach of Ribeira das Pratas, Santiago Island, hide weeks of work by volunteers and the difficulties they will still face to reach adulthood.

“It’s incredible. It’s a feeling of duty done, because we spend 60 days here, 45 days, preserving a nest, waiting for it to hatch. It is an enormous satisfaction when we manage to put those little turtles to the sea”, tells Lusa Rafaela Tavares, when seeing the last one of the night, already in the Atlantic and out of the reach of her small torch.

The third-year biology student at the University of Cape Verde is one of the dozens of volunteers who take turns taking care of the nursery installed for the first time on that beach in the Municipality of Tarrafal by the environmental organization Lantuna.

That black sand beach has been hosting since July its first sea turtle conservation program, also rare until now on the island of Santiago, with which Lantuna is trying to put an end to the desolate scenario of the spawning period of previous years.

The results are there to see and in about a month, the nursery installed there has already allowed more than 500 turtles to reach the sea, at the rate of several dozen every nights.

They passed through the spawning phase on the beach and were placed in nests controlled and protected inside the nursery, a process that is always monitored also in terms of temperature, until the eggs hatch, between 45 and 60 days later.

“We allow the turtles to emerge naturally. Because the nursery is already artificial, we try to make the process as natural as possible”, explains Rafaela Tavares, who, minutes before, with the temperature dropping as night fell, carefully excavated the nests that had hatched in the previous days, looking for the turtles that were left behind.

In less than an hour, this search resulted in seven more little Caretta-Caretta turtles found a few centimeters down. They had hatched earlier but could not reach the surface on their own.

Once the rescue was done, the process of counting, sampling tests per nest, measuring, and weighing, carried out by Lantuna’s volunteers and supervisors, followed, like those that emerge naturally more than 500 in a month.

In the dark of night, these volunteers carry the seven little turtles to within about three meters of the sea and release them onto the sand. There follows an unbridled journey in search of the sea, during which nobody moves on the sand, given the smallness of the turtles, about five centimeters, and total darkness.

With their arrival at sea, a weeks-long job of ensuring that the spawning was done, the nests and their eggs escaped predators, such as dogs and crabs, and that they managed to hatch and reach the sea, ends, while a new challenge begins, hoping to live more than 50 years, reach above one and a half meters in length and 130 kilos in weight.

“There is an estimate that out of every thousand little turtles only one or two make it to adulthood. That is, there is a very strong work ahead, in which we know that with 500 turtles we still won’t reach two adults in 20 years”, notes Denis Dias, Lantuna technician and coordinator of the sea turtle conservation project in the municipality of Tarrafal, centered on four beaches, including Ribeira da Prata.

“The history of this beach was of a high level of predation, by crabs, by dogs, flooding [of the nests]. The little turtles were practically not reaching the sea,” he explains.

Lantuna’s project on that beach began in 2020, with the monitoring of 20 natural nests, “to see what was happening”: “And 98% of those nests were predated by dogs and crabs, and others were carried away by the tide. So the conservation strategy was to create this nursery. First, we built a nursery with the idea of laying 100 nests, but there wasn’t enough space. We’re already at 170 nests”.

The potential of that beach for the reproduction process of marine Tortugas in Santiago – on a much smaller scale than other Cape Verdean islands – is now proven by Lantuna, through the volume of spawning nests (relocated in the nursery), as well as the success rate in hatching, which is close to 50%.

“It is a beach with a spawning rate that, at the level of the island of Santiago, is high, but with a high level of predation. So, the conservation strategy here on this beach was the best we found: to create this incubation nursery, to protect these nests,” stresses Denis Dias.

In the nursery, created for the first time for the 2021 spawning period, several techniques were applied to control the temperature – a challenge made worse by the fact that it is a black sand beach -, which determines the turtles’ sex.

“It’s a concern because we can’t be releasing too many females,” he explains.

See also  "Appeal to God for Russia" - Late T.B Joshua's prescience to the world in 2013

Hence, since July they have used three different techniques in the nursery to lower the temperatures: netting, coconut leaf covering the nests or regularly wetting the sand superficially. When the spawning is over, at the beginning of October, and after all the nests have hatched, depending on the most successful techniques they plan to adapt the strategy next year.

“It’s a positive balance, we’re halfway through and we hope this success continues”, guarantees Lantuna’s project coordinator, who is also trying to mobilize the local community to preserve the species, when they used to slaughter turtles that came to lay their eggs for meat consumption.

Among the more than 50 Lantuna volunteers who have so far monitored that nursery, some are already from the community of Ribeira da Prata itself, an involvement that does not stop there. Some volunteers, university students in Praia, like Rafaela, stay in the homes of families in the village.

“With the ‘Home Stay’ project, the stay of the volunteers, the coordinators, and the supervisors are in the homes of people from the community. It is a way of ensuring an extra livelihood for families, discouraging the practice of turtle trapping by families,” explains the volunteer.

But in Ribeira das Pratas, the result goes even beyond the numbers of nests and turtles released into the sea.

“This year we have not had any dead turtles [spawning] on this beach,” points out Rafaela, without hiding her emotion.

Cape Verde became the second most important sea turtle nesting point in 2020, with the number of nests at a record high of almost 200,000, according to government data.

Mon Sep 20 , 2021
Spread the loveTweet Many secrets have been unravelled about how the Kumawood movie industry is inundated with voodooism and enmity which add up to the tall list of reasons why the once vibrant Twi-speaking industry is seemingly collapsing. Kumawood actress, Awo Yaa who has had her own fair share of […]