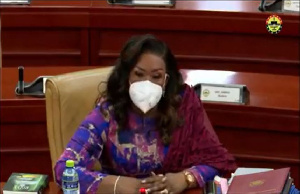 The President’s Minister nominee for Fisheries and Aquaculture, Mavis Hawa Koomson is currently before the Appointments Committee of Parliament.

The Member of Parliament for Awutu Senya East served as Minister for Special Development Initiatives in the first term government of President Nana Addo Dankwa Akufo-Addo.

The President who is currently constituting his second term government has nominated the MP and 45 others for various ministerial portfolios.

Parliament’s Appointment Committee in line with constitutional requirements is vetting the nominees to approve them.

Madam Hawa Koomson’s appointment with the Committee is one of the most anticipated.

The Committee has received petitions from some individuals asking that her nomination be turned down.

Watch the vetting below:

Tweet
See also  They have sex in their offices, God will judge the prophets of Ghana - Prophet Kofi Oduro

Thu Feb 18 , 2021
Spread the loveTweet Founder of the Ajagurajah Movement, Bishop Boakye Asiamah has revealed that a popular Ghanaian rapper is married to a demi-god. Giving a vivid description of the rapper, the Ajagurajah Movement head said he is dark in complexion, likes to wear dark shades, and also keeps a beard. […]