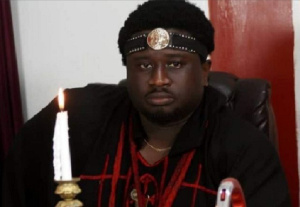 Founder of the Ajagurajah Movement, Bishop Boakye Asiamah has revealed that a popular Ghanaian rapper is married to a demi-god.

Giving a vivid description of the rapper, the Ajagurajah Movement head said he is dark in complexion, likes to wear dark shades, and also keeps a beard.

Expanding his comments further, he stated that the rapper’s wife is responsible for his success, and as such if he dares to leave her, his life will become very miserable.

This according to him is because the man will be stripped of every spiritual backing he has received from his wife since the start of his career.

“There is a popular rapper in Ghana. His wife is a demi-god and I’ll never stop saying it. He is dark in complexion and likes to wear dark sunglasses a lot. You’ll never hear any news about his wife. The day that rapper leaves his wife, he will go back to square one. If he thinks I’m lying, he should try it because it is her spirit that is backing his career. It is his wife’s spiritual backing that has brought him this far so when he wakes up every morning, he kneels and worships her like a god and says thank you to her,” he stated in an interview with Zionfelix.

When asked to reveal the identity of that particular rapper and his wife, Bishop Asiamah responded saying: “I don’t do things for fame so I’ll not mention any names. The rapper himself knows what I’m saying is true.”

He added that anytime the musician fights with his wife at home, he gets trolled on social media.

“Anytime they fight at home, his day gets messed up. That particular day, he gets trolled on social media. I have eyes so I can see a lot of things going on in the country.”

Thu Feb 18 , 2021
Spread the loveTweet The Duke of Edinburgh has been spending a second night in hospital after he was admitted as a precaution due to feeling unwell. Prince Philip, 99, was said to be in “good spirits” after being taken to King Edward VII Hospital in central London on Tuesday evening. […]