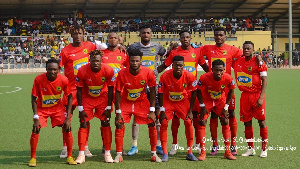 • If the team was to progress, then players must be paid well

Kwabena Yeboah has described the current salary of the players of Kumasi Asante Kotoko as ‘slave wages’ and says the base salary for a Kotoko player in the year 2021 should be US$2000 and not the GH¢1,000 to GH¢2,000 that the players are receiving now.

According to him, if the team wants to be a ‘force to be reckoned with’ then the players need to be paid very well for good results.

He said Kotoko needs to build the team and sustain the players for a period of five to six years and also attract players from outside the jurisdiction of Ghana. This, Kwabena Yeboah said, involves a lot of money.

Kwabena Yeboah explained on ‘Starr Chat’ that, “If you really want to attract the best material, you must pay very well. What we pay right now in Ghana for me in blunt language; these are slave wages for footballers. You cannot pay a Kotoko player you want to make a mark in Africa and consistently wins matches for you a GH¢1,000, GH¢2,000.

“It’s a joke. The least any Kotoko player deserves, especially the starting players, is US$2,000 because you have your players leaving for Benin, to other parts of Africa because they’ve been cajoled and lured by US$1,000 a month because they cannot receive that kind of money here, so they will definitely leave.

“If you want to compete, I’m saying that the starting base [salary] should be US$2,000 as you look to improving the amount. Until we start doing that, our players will continue to leave in numbers, we’ll continue to mark time; it doesn’t matter who you bring as the CEO, we’ll continue to have failures,” he stressed.

Thu Sep 2 , 2021
Spread the loveTweetBraydon Manu has revealed his incredible pride over his first national team call-up insisting he was completely stunned when Ghana coach Charles Akonnor handed him his maiden Black Stars call-up last week, saying he wants to full take advantage of the situation. The Germany-born winger the culture of the […]