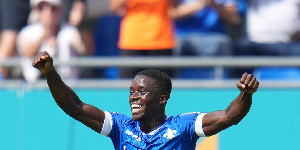 Braydon Manu has revealed his incredible pride over his first national team call-up insisting he was completely stunned when Ghana coach Charles Akonnor handed him his maiden Black Stars call-up last week, saying he wants to full take advantage of the situation.

The Germany-born winger the culture of the African country is part him insisting that he is well versed with the Ghanaian tradition and speaks the local language of Twi fluently despite being born in Europe.

The 24-year-old, who has both German and Ghanaian citizenship, was handed his first Ghana senior national team call-up when he was invited for this week’s 2022 World Cup qualifiers.

Manu secured his place in the Ghanaian national team’s games against Ethiopia and South Africa after his recent good performances in the Bundesliga II were noticed by the Black Stars handlers.

His impressive form for German side SV Darmstadt 98 forced the Black Stars boss to call him for the matches to be play on September 3rd and 6th respectively.

“It makes me incredibly proud to have been nominated for my parents’ home country,” said Manu as he travelled to join the Black Stars for the first time in his career.

“I grew up with the culture, speak the language and have always felt like a Ghanaian. I know the enthusiasm and emotions the ‘Black Stars’ arouse all over Ghana, and it is unbelievable that I am now part of this team myself.

“When I found out about it, I was speechless at first. And that rarely happens to me. I still can’t quite believe it and will probably only realize it when I’ve actually made it to the national team. ”

Manu joined the Black Stars for the first time on Tuesday as they travelled to Cape Coast when the match against Ethiopia will be played on Friday.

With some clubs in Europe refusing to release their players while some others have completely refused to turn up, he is hoping to impress and establish himself as a first team player of the Black Stars.

Thu Sep 2 , 2021
Spread the loveTweet• Kwabena Yeboah says the current management structure of his club is a joke • He said, the team needs a strategic investor • He reveals Kotoko Chairmen over the years have been supporting the teams with their own money Veteran sports journalist, Kwabena Yeboah, has described the […]