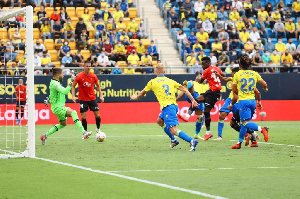 Ghana defensive midfielder Iddrisu Baba scored but it wasn’t enough as Real Mallorca drew one all with Cadiz in La Liga.

Baba’s goal looked to have secured three points for Mallorca but Cadiz equalised in stoppage time.

In the 28th minute, Iddrisu went into Cadiz’s box for a corner. The ball fell kindly into his path and he made no mistake, scoring with a low finish.

The away side defended the slender lead until the 91st minute when they conceded a penalty, which was converted by former Manchester City striker Alvaro Negredo.

Mallorca players looked dejected at the end of the game while Cadiz celebrated the stalemate.

The goal was Baba’s second of the season, having scored his first early this month against Levante.

Sun Oct 31 , 2021
Spread the loveTweetGhana Premier League champions, Accra Hearts of Oak have announced their squad for the 2021/22 campaign without new signing Gladson Awako. The midfielder joined the Phobians from city rivals, Great Olympics on a two-year contract in a deal worth $15,000. Awako has not trained with the club for the past […]