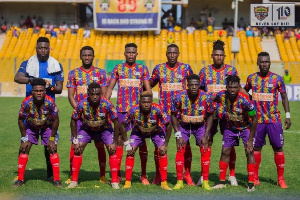 Ghana Premier League champions, Accra Hearts of Oak have announced their squad for the 2021/22 campaign without new signing Gladson Awako.

The midfielder joined the Phobians from city rivals, Great Olympics on a two-year contract in a deal worth $15,000.

Awako has not trained with the club for the past months citing personal issues and did not feature for the club in the CAF Champions League playoff games.

The Phobians, however, begin their title defense in a crunch fixture against Legon Cities in match-day one at the Accra Sports Stadium on Sunday, October 31.

The 26-man squad list of Hearts of Oak was released without Abdul Umar Manaf who was also omitted from the list.

Surprisingly, Enock Asubonteng, Seidu Suraj and Nurudeen Abdul Aziz were also left out of the club’s squad for the new season.

Tweet
See also  ‘We’re the monkeys, so no one respects AFCON’ – Evra on Ballon d’Or positions

Sun Oct 31 , 2021
Spread the loveTweet• Bulldog disagrees with the assertion that prison kills the destinies of convicts • Bulldog lists individuals whose career skyrocketed after serving jail term • Bulldog chastises Ajagurajah over ‘spiritual bath’ comments Bulldog has called on the IGP to immediately invite Ajagurajah movement founder, Bishop Kwabena Asiamah, over some comments which he believes […]