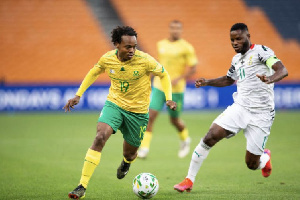 • South Africa comes next on the table with a point

The Black Stars of Ghana will take on the Bafana Bafanas of South Africa in their second game for the 2022 FIFA World Cup qualifications on Monday, September 6, 2021.

The two powerhouses in Africa football will clash in Johannesburg as the aim to top Group G, to qualify for the final playoffs remains the end goal.

The Black Stars won their first game in the qualifiers by beating Ethiopia by a lone goal in Cape Coast while the Bafana Bafana’s drew goalless with Zimbabwe at the Harare National Sports Stadium.

Ghana and South Africa have faced themselves 14 times in all competitions since their first meeting on November 26, 1994.

Both teams have won four each while the remaining six games have ended in a stalemate.

Ahead of the big game, GhanaWeb looks at the number of times these two powerful countries in African football have met.

The photo below depicts the number of games played between the two countries in detail:

See also  Player Ratings: How the Black Stars fared in the 2022 World Cup qualifiers against Ethiopia

Wed Sep 8 , 2021
Spread the loveTweet Nollywood actress Tonto Dikeh has been in a back state this past few days after her three-month-old relationship with boyfriend Prince Kpokpogri ended in tears. After the break-up, a lot of allegations were made against the actress by Prince on his social media handle a move which […]