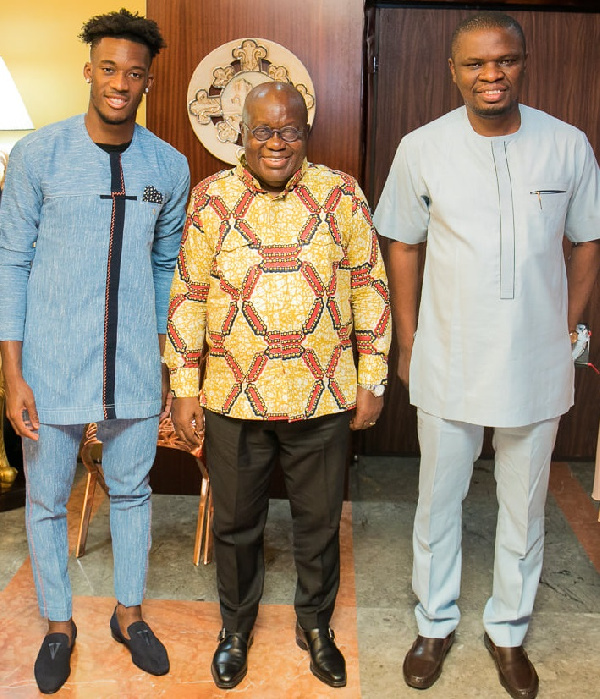 Ghana is on the verge of grabbing England youngster Callum Hudson-Odoi as coach Gareth Southgate is growing resigned to the possibility of losing the talented player to the Black Stars, says a report by one of the biggest newspapers in England.

This revelation has sparked the Ghana Football Association (GFA) into overdrive to attract the player who was in Ghana over the summer and met high ranking officials of the football federation and government.

The GFA are hitting the phones of the Chelsea star and his father to get him to accelerate their quest to grab the youngster who has already spoken to officials about his potential switch.

The Chelsea forward refused an invitation to play for England Under 21 team in the European Championship qualifiers against Romania and Kosovo earlier in the month.

The 20-year-old’s reluctance to play for the European country’s youth side has sparked concerns by the England boss Southgate that the Blues youngster is on verge of switching nationality to play for Ghana.

Hudson-Odoi parents are Ghanaians and his father played for the country and Ghanaian champions Accra Hearts of Oak for several years before he retired from his playing career.

That is becasue since he hasn’t played for England in the finals of major tournaments and his senior competitive appearances occurred before he turns 21, the tricky winger can apply to play switch and play for the Black Stars.

Hudson-Odoi has not ruled out the potential of playing for Ghana in the past when he was asked about the chance of snubbing England to play for the Black Stars, insisting the West African country too is ‘home’.

“I think obviously when you’re young, you have the opportunity to play for England throughout all the years, from under 15 to under 16 all the way up,” Hudson-Odoi said when he was asked about the chance of playing for Ghana.

“When they obviously gave me the opportunity to come I was in the country already.

“It’s something that I already had in my mind, set on already playing for England.

“So it was the thing obviously choosing Ghana or England, and at the end of the day I said I always had the right people around me who always advise me – what’s right, what’s wrong. England came and I said ‘Yeah, let me go and play for my country.

Considering that timing, he would secure his nationality switch papers from FIFA in time to play for the Black Stars for the 2022 World Cup in Qatar.

The 20-year-old is frustrated by the England FA’s consistent snubbing and being dropped to the Under-21s of the Europeans.

He became the youngest person to ever make a match-day appearance for England in the European Championship qualifier against the Czech Republic two years back.

The player of Ghanaian heritage feels that his peers Bukayo Saka, Jadon Sancho, Phil Foden and Jack Grealish have been favoured ahead of him even though some believe he can play better.

Hudson-Odoi has a strong connection to Ghana and visited Accra during the summer, where the team met Ghana president Nana Akufo Addo, the minister of sports Mustapha Ussif as well as Ghana FA coach Kurt Okraku.

Sat Sep 18 , 2021
Spread the loveTweetFormer Asante Kotoko defender Godfred Yeboah who died some months ago will be interred today Saturday, September 18, 2021. The defender will be buried in a Kotoko designed football boots with TV3 logo his nickname embossed on the casket. He died in the wee hours of Tuesday, August […]