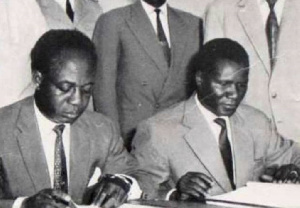 • Relations between Ghana and Guinea go back to the independence years

Events in Guinea relative to the coup that has ousted President Alpha Conde has thrust the relations between Ghana and the country into the limelight.

The immediate connection has been the reported use of a quote from former President Jerry John Rawlings in the address of Colonel Mamady Doumbouya in the address announcing Conde’s ouster.

But relations between Accra and Conakry date as far back as the immediate post-independence era specifically between the two respective first presidents – Osagyefo Kwame Nkrumah and Sekou Toure.

The duo along with Mali’s Modibo Keita formed a tripartite pan-African alliance with which Nkrumah was building a united African dream according to analysts.

It turned out that relations between the three went beyond the fraternity and diplomacy of its presidents and people but at a point, Ghana advanced 10 million dollars to the Guinean nation.

The circumstances under which this payment was made was explained by Prof Baffuor Agyemang-Duah, a former United Nations senior governance advisor.

The payment was supposed to support Sekou Toure’s government after independence from France because the French whiles leaving virtually took everything they had brought in as a colonial administration from pens to tables and rail lines.

“Sekou Toure belongs to what we call the first generation of African leaders. Those who came in the late 50s to 60s, the first presidents when these African countries gained independence. He was one of the radicals, a very close friend of Kwame Nkrumah… so Sekou was a leftist in a way and he was for true independence.”

France the under Charles de Gaulle, at the height of the push for independence, gave all its colonies two options – either they wanted full independence or independence with some kind of limitations, that is to maintain links to France.

“All the colonies chose the latter, in other words, to maintain their links with France. It was only Guinea under Sekou Toure who said, no. And you know the punishment the French meted out to Guinea? They removed everything, tables, office desks, railway lines, everything that they were using in Guinea as colonial administrators were removed.

“Everything was removed. That is why Nkrumah rushed to give Sekou Toure 10 million dollars to help start his administration,” he added.

He explained the possible motive for Nkrumah to advance such financial assistance to a sister nation.

Following his overthrow in 1966, the only African country where Nkrumah lived was in Guinea with his friend Sekou Toure till his remains were repatriated to Ghana under the Rawlings regime for reburial.

You were the careless one, so why hold a grudge against me? – Jagger Pee questions Gemann

Wed Sep 8 , 2021
Spread the loveTweetSince Gemann announced his tell-it-all book about the incident that cost his career, he has had a lot to say about his former friend and accomplice, Jagger Pee. He described Jagger Pee as an opportunist and called him a ‘fair-weather’ friend. But Jagger Pee has refused to accept […]