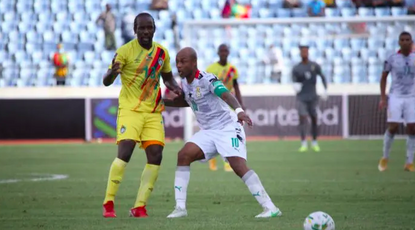 Spread the love
Tweet
The Black Stars of Ghana convincingly beat Zimbabwe by 3-1 in a FIFA World Cup qualifier on Saturday, October 9.

The Black Stars played with passion and intensity, especially in the first half, to score more than two goals, only for the second time this year.

The Black Stars needed victory in the race to qualify for Qatar 2022, after South Africa earlier beat Ethiopia in the other group game.

The Black Stars started on the front foot, with some quick intricate passing which caused a few problems for Zimbabwe early on.

Ghana were immediately rewarded for their strong start when Ajax Amsterdam star, Kudus Mohammed finished neatly with his right foot after some good build up play involving himself, Jordan Ayew and Kamaldeen Sulemana.

Milovan Rajevac’s side continued to press on for the second and were very unlucky before the break.

After the break, the Zimbabweans equalised in the first five minutes.

The Black Stars’ superior quality came to play, when Thomas Partey dispossessed his man before beating two defenders to shoot low and hard into the bottom corner to give Ghana the lead again (2-1).

The win sends Milovan Rajevac’s side second behind South Africa in Group G.