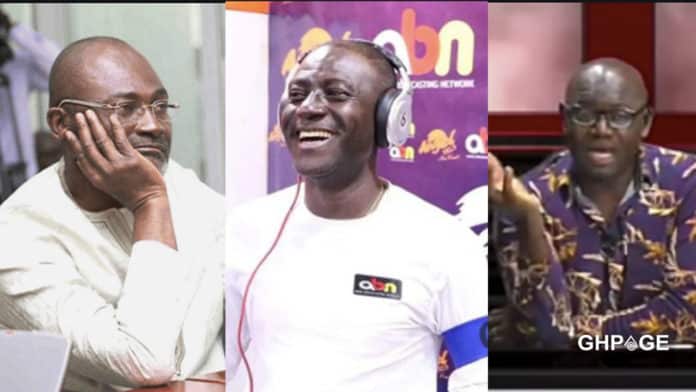 Onua FM morning host Captain Smart has reacted to Kwaku Annan and Kennedy Agyapong’s allegations that he tried to enter into a tertiary institution with a fake certificate.

During NET 2 TV’s “The Seat” show yesterday Kwaku Annan showed a letter from the Christian Service University College indicating that Captain Smart tried to pursue a degree in their institution.

The letter read that they got to know the certificate presenter by Captain Smart was fake hence denied him admission.

Reacting to the allegation, Captain Smart on his social media timeline mocked Kennedy Agyapong and Kwaku Annan referring to them as “Good for Nothing Pair”.

According to him, the letter they showed on the program has been denied by the said institution way back in October 2020.

WATCH VIDEO : ‘Shameless’ Kweku Baako has lied to Ghanaians for over 40 years — A Plus

Captain Smart continued that because Kennedy Agyapong and his host have nothing against him, they tried to attack him with that fake letter.

His post reads: “Now it’s evident Kennedy Agyapong and his host are not but CHEAP, GOOD FOR NOTHING PAIR. CHRISTIAN SERVICE HAS DENIED KNOWLEDGE OF THIS IN OCTOBER 2020. You see you have nothing to use against me just a cheap old fake document. Hahahahaha. Why did u cover some part. This came out last year. Very cheap people. Hahahahahah. Do proper investigations and don’t rely on fake documents. Hahahahahah. I laugh enter my bedroom.”

Earlier Captain Smart stated that he has been advised by some big men not to respond to comments from Kwaku Annan and his boss Kennedy Agyapong.

Thu Jul 22 , 2021
Spread the loveTweet A lady has narrated how her boyfriend who allegedly died in an accident 5 years ago reappears with his wife and twin borns at the shopping mall. 5years back on this day, I received a call from my boyfriend’s mother telling me her son was involved in […]