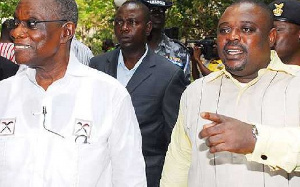 • According to his former colleague in government, Anyidoho is behaving like a vagabond with his recent utterances about the party

According to the Odododiodio Member of Parliament, Anyidoho was a nobody in the government at the time despite having positioned himself as someone with considerable power.

“He (Anyidoho) was perceived to be powerful but he was a nobody, as Director of Communications, he did not preside over me, as Director of Operations, so he was not running the government,” he submitted on Citi TV’s Face To Face programme.

Pushed by the show host about Anyidoho’s influence at the time, he reiterated: “That is how he projected himself and that is how you people perceived him but he was a nobody in government, he wasn’t powerful.”

Vanderpuye, who proposed Anyidoho to the then-president said he will continue to defend his professional abilities but that had nothing to do with the character and attitude that Anyidoho continued to exhibit after leaving the government.

“Koku is just like a vagabond, a wayward child; so I don’t want to discuss him. As far as the teachings of Prof Mills, the knowledge we acquired after working with somebody like Professor Mills, I can say without any hesitation that he didn’t learn anything.

“I have learnt something, I picked something from Prof Mills which has made me a better person. If you consider the children of Professor Mills, he is a vagabond,” Vanderpuye stressed.

Anyidoho has been on a warpath with the National Democratic Congress since he lost the race for Secretaryship at the last congress to his boss, incumbent Johnson Asiedu Nketia.

After a series of scathing attacks on the party, he was suspended and later expelled after two petitions were filed against him for indiscipline and anti-party conduct. He has vowed to challenge the expulsion by the Functional Executive Committee insisting that he was never served a formal letter of expulsion.

He is currently head of the Atta Mills Insititute, an outfit that is dedicated to securing the legacy of his former boss, the late John Evans Atta Mills.

Manasseh thanks God for 'quick healing' of ‘untouchable’ Owusu Bempah