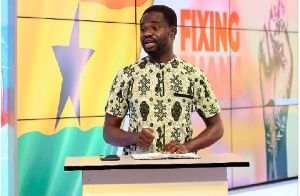 • Bempah and junior pastors are facing charges including threat of death

Journalist Manasseh Azure Awuni is happy that Reverend Owusu Bempah has recovered quickly and been returned to police custody pending his next appearance before an Accra Circuit Court on Monday, September 20.

Owusu Bempah was taken ill Monday night and sent to the Police Hospital for a yet to be disclosed illness, hours after the Circuit Court denied him and other accused persons bail.

“Owusu Bempah has been discharged from the Police Hospital and taken back into police custody. We thank God for the quick healing,” Manasseh posted in a tweet on Tuesday evening.

The preacher Manasseh described in an earlier post as ‘an untouchable man of God’ was arrested on Sunday, September 12 at his church premises, together with three other members of his church.

They were subsequently slapped with charges of offensive conduct conducive to breach of peace, the threat of death relative to threats on spiritualist turned evangelist, Nana Agradaa. Bempah and co are also facing charges of assault of office public officers.

Judge Afia Owusuaa Appiah denied him bail and remanded him into police custody to re-appear on Monday, September 20.

It is the third post Manasseh Azure Awuni is making on the preacher since his arrest on Sunday.

The initial post was celebrating the Ghana Police Service for arresting Owusu Bempah who is known to have high political connections along with a taxi driver who made confessions on LIVE TV about involvement in ritual murders.

Wed Sep 15 , 2021
Spread the loveTweetFour notable European coaches have slapped in their CVs to be considered for the vacant national team post of Ghana following the sacking of Charles Akonnor, Ghanasoccernet.com can exclusively reveal. Among the early applicants for the Black Stars vacant is Italian coach Francesco Guidolin who coached Stephen Appiah […]