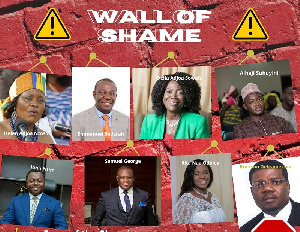 Ningo Prampram Member of Parliament, Sam Nartey George, and seven other colleagues who are championing an anti-same-sex bill in Parliament, have been ‘dishonoured’ by a group promoting LGBTQ+ activities on the continent.

The Africa Queer Youth Initiative, AQYI, ‘inducted’ the eight MPs onto its ‘Wall Of Shame’ for their roles in opposing same-sex relationships and seeking through legislation to criminalize same.

In a statement announcing the ‘Wall Of Shame’ initiative, the group referred to the MPs as ‘haters of human rights and democracy,’ adding “We believe it is they who should be ashamed. We are naming and shaming them for neglecting their fundamental duty to protect those they serve, including LGBT+ Africans.

“Many of these lawmakers have failed to deliver the dividends of democracy to their people and are shamelessly working hard to criminalize peaceful same-gender-loving fellow Africans,” their statement read in part.

They wondered why and how of the many challenges that Ghana faces, the MPs will elect to champion legislation that is critical of Minority groups.

Currently, the bill has been laid before the house and referred to the appropriate committee for consideration.

The Ningo Prampram MP has strongly defended the need for the bill which he insists is a necessity in preserving the moral and cultural values of Ghanaians in general.

Same George insists that LGBTQ+ tendencies are not human rights but preferences that need to be regulated within the context of what Ghanaian society and culture accepts.

The bill has the full blessing of Speaker Alban Bagbin who is on record to have said he is pro-life and will ensure that the bill is passed into law as soon as possible.

Tue Aug 24 , 2021
Spread the loveTweet• Ibrahim Mahama once sold his work for a million dollars • He has been named the 73rd Most Influential African by the African Report • Ibrahim Mahama today uses his influence to inspire children to be more artistic in their upbringing “For some years now, I’ve been […]