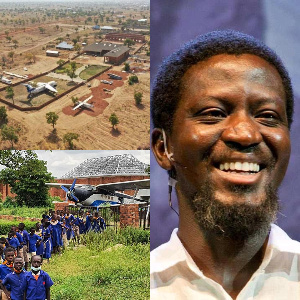 • Ibrahim Mahama once sold his work for a million dollars

“For some years now, I’ve been very much interested in using the failures of history through specific material conditions as a starting point for artistic interventions around the city,” that is how artist Ibrahim Mahama [not the brother of former president John Mahama], describes his inspiration for the art he does.

Born in Tamale in the Northern region in 1987, where he currently lives and works, Ibrahim Mahama, the 73rd Most Influential African by the African Report is today spearheading an artistic drive aimed at inspiring young children to dream big.

According to a biography on him, published on artsy.net, in his installations and wall-based works, Ibrahim Mahama considers how capital and labour are expressed in common materials.

Some of his works included in the 2015 Venice Biennale show that Mahama is best known for his use of jute sacks, cloth bags once used to carry cocoa and now employed as vessels for coal.

Each sack is inscribed with names and embellished with regional patterned fabrics.

“The coal sacks began as an extension of how the body could be looked at. It contains all these systems and makings of original owners, which have been transferred from the bodies creating a link between the two forms,” Ibrahim Mahama is reported to have said.

But the most intriguing part of his story is how he sold one of his artworks for a whopping US$1 million and decided to use the money to acquire six planes; not for fun, but to establish a learning area for young people.

In a post shared on Facebook and also widely shared elsewhere online, Ibrahim Mahama is said to have acquired the six used-aircrafts and converted them into classrooms for kids at his Redclay Studios, one of his art centers in Ghana.

The place sits on more than 100 acres of land in Tamale and provides the opportunity for locals to experience art, be artists and showcase the evolution of art in Ghana. The institution is dedicated to the exploration of new forms of imagination.

Asked what he makes of parents who push their children to pursue dreams they might not be interested in, Ibrahim Mahama said parents need to have time for their children.

“Parents should be a bit patient; they should listen to their children in terms of what they want to do and what they want to achieve. And they should just give them time to grow because at the end of the day, for me, for instance, I knew that I wanted to do something with my hands but in the beginning, I was not so sure if I wanted to be an artist but when I went to secondary school and I started doing arts and I realized that it really made me happy, my parents were supportive of it. They didn’t say because you’re doing art we don’t support.

“Even if you don’t like what your children are doing, you should try and understand it from their viewpoint, just support them and see how far they take it and see what they make of it. And, you can’t always quantify a subject by how much money. For instance, I did Visual Arts, I never really imagined that I could make paintings or big installations that could sell for 200,000 or half a million, and I never imagined I’d reuse those monies to build spaces like this,” he explained.

Mahama obtained an MFA in Painting and Sculpture in 2013, and a BFA in Painting in 2010 from the Kwame Nkrumah University of Science and Technology, Kumasi, Ghana.

The Ghanaian artist has given new value to jute sacks, and it is paying off.

His use of the tattered material – a popular object used to transport cocoa beans in Ghana – in large-scale installations has been recognized beyond national borders, making him the youngest Ghana-based artist to show at the Venice Biennale in Italy.

Watch these interviews of him:

Tue Aug 24 , 2021
Spread the loveTweet• Polo has offered his services to Kumasi Asante Kotoko • Kotoko are without a coach after Mariano Barreto left the club • Polo believes the club will challenge for trophies next season Legendary Ghanaian footballer, Mohammed Polo has expressed interest in the vacant coaching job at Kumasi […]