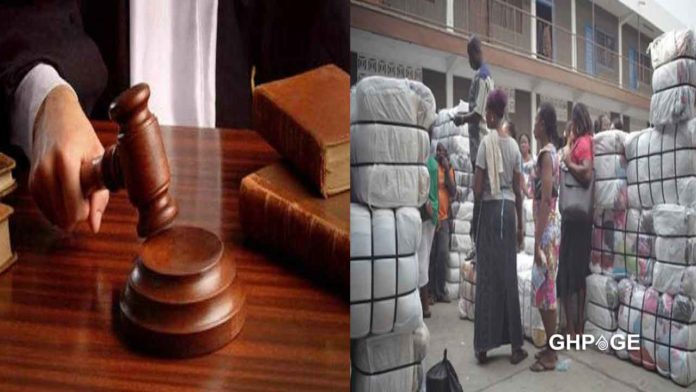 Kingsley Kwame Yeboah, a 27-year-old man who was arraigned before an Accra Circuit Court over a stealing charge (he stole sacks of used clothes and shoes from his colleague traders valued at GH¢10,570) has explained why he carried out that act.

Mr Yeboah told the court that was forced to steal due to persistent pressure mounted on him by his pregnant partner for quite a long time now. He said his wife expects more from him but his earnings don’t meet her demands.

Sorry Kingsley pleaded guilty to stealing in a court presided over by Mrs Susana Eduful, and prayed for the court to be lenient with him. The judge considered his plea for mitigation, and the fact that he was remorseful, sentenced him to eight months imprisonment in hard labour.

He said on August 9, 2021, at 6 am the complainants reported at their business centres and noticed that their wares were stolen. They lodged a formal complaint to the Police and upon a tip-off, Kingsley was grabbed in the market with one sack of baby clothing.

During investigations, Kingsley admitted the offence and confessed that earlier in the day at about 0300 hours, he went to the market and stole two sacks of second-hand clothing and a sack of second-hand shoes.

The Court further heard that Kingsley sold 150 pairs of the stolen children’s shoes valued at GH¢2,770.00, to Yaw. The Court ordered the prosecution to release the retrieved items to the complainants.

There’s a blessing in keeping multiple wives than side chicks-Dr. Kwaku Oteng

Sat Aug 14 , 2021
Spread the loveTweet The Chief Executive Officer of Angel Group of Companies, Dr Kwaku Oteng in an interview with Vaults Magazine has made some comments that have people in awe. According to the business magnate, keeping multiple wives than side chicks (concubines) gives more blessings. He’s is of the view that it’s […]