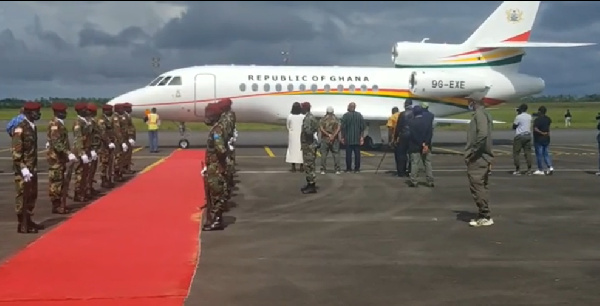 The presidency on Tuesday (September 21) confirmed the recent use of Ghana’s presidential jet by the Liberian president, George Weah, Accra-based Joy FM have reported.

According to the report, a Jubilee House official said President Weah used Ghana’s presidential jet to the September 15 ECOWAS summit that took place in Accra adding that its use was granted based on a request to the presidency.

In his latest exposé on alleged flamboyant travel expenditure of President Nana Addo Dankwa Akufo-Addo, Member of Parliament for North Tongu, Samuel Okudzeto Ablakwa said despite the failure of Akufo-Addo to use the jet, the Liberian leader had used it twice in a week.

“Indeed, the president of Liberia landed on Saturday, 18th of September landed at the Robert Airfield, 10 am Liberian time. We know this is the second time in a week that the Liberian president is using our presidential jet,” he confirmed on Joy FM’s News Night programme on Tuesday, September 21.

He said the usage raised matters of a double burden on the Ghanaian taxpayer who funds the luxury travels of the president and the further expense of another president who chooses to use our presidential jet.

In an earlier write up on Facebook, Ablakwa wrote extensively about Akufo-Addo’s use of a chartered luxury jet, the LXDIO for his recent trip to the United States where he is attending the United Nations General Assembly.

About President Weah’s use of the presidential jet which government has said is not conducive for long haul flights, Ablakwa wrote: “Rather intriguing, it does appear other Presidents have more confidence in Ghana’s Presidential Jet than President Akufo-Addo.

“While President Akufo-Addo was engaged in his Arabian-King-style cruise on the LX-DIO at our expense, our Presidential Jet was being used by Liberian President, George Weah.

“Our monitoring reveals that President Weah landed at the Roberts International Airport (Robertsfield) in Liberia onboard Ghana’s Falcon at 10:00GMT on 18th September, 2021. It was the second time in the same week the Liberian leader was exclusively using our presidential jet,” he added.

Missing but found woman in Takoradi was not pregnant – Regional Minister

Wed Sep 22 , 2021
Spread the loveTweet The Western Regional Minister, Mr Kwabena Okyere Darko-Mensah, has said that the missing but found woman who was reported to have conceived, 28-year-old Josephine Panyin Mensah, was actually not pregnant. Josephine was reported missing by her husband, Michael Simmons, on Friday, September 17, after a search for […]