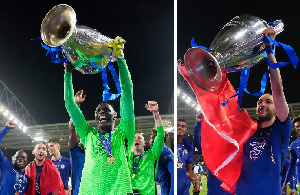 Ajax aren’t short of African interest, although they’re unlikely to be there among the contenders come the end of the campaign…are they?

They remain a talented young outfit, but will fancy their chances to advance from a group containing Sporting Club Portugal, Besiktas and Borussia Dortmund.

Will this be the season when Sevilla prove they’re good enough to hang with the big boys in the Champions League, rather than just being heavyweights in the Europa League?

This could be the year when En-Nesyri proves himself to be world class, while Morocco goalkeeper Bono has already proved that he’s comfortable at this level.

#8 Youssoufa Moukoko & Dan-Axel Zagadou
Borussia Dortmund are a match for anyone on their day, particularly with Erling Haaland leading the line.

Like Ajax, they’ll be happy with their group-stage draw, and if he can stay injury-free, Moukoko can be this year’s UCL breakout star.

Atletico Madrid will be desperate to make up for an underwhelming run in the UCL last term, and they look well placed to enjoy a successful campaign both domestically and in Europe.

Antoine Griezmann is a key addition up front, although the trio of Liverpool, FC Porto and AC Milan represents a Group of Death.

There’s a swell of optimism around Old Trafford following the signing of Cristiano Ronaldo, with many claiming he could be the missing piece of the jigsaw at Manchester United.

They are looking like genuine European contenders after their near miss in the Europa League last term, although it remains to be seen what kind of part Bailly and Diallo will play in their success this season.

Liverpool have the experience of winning the Champions League—back in 2019—and this generation have subsequently added the Premier League crown to their honours haul.

Salah—who struck his 100th Premier League goal this weekend—could make a case to be the world’s finest player this term, and he’ll be ably supported by the irrepressible Mane.

Julian Nagelsmann didn’t truly convince during pre-season, but his Bayern Munich team are finally finding their feet—look at how they dispatched RasenBallsport Leipzig at the weekend.

They’ll be firmly tested by Barcelona during the group stage, but will be right up there come the end of the season.

Unlikely champions at the end of last season, Chelsea should continue to grow under Thomas Tuchel, while the arrival of Romelu Lukaku gives them a cutting edge that will be the envy of the rest of Europe.

In Mendy, they also boast one of Europe’s finest keepers, while Ziyech—bouncing back after a year full of fitness problems—should hope to return to the form that inspired Ajax to the semis in 2019.

The arrival of Jack Grealish should help Manchester City believe that they can go one further than last season, when they were defeated by Chelsea in the final.

However, Mahrez, who is proven at this level, will likely be just as important as Grealish this season, and he proved against Paris Saint-Germain in last season’s semis that he is a genuine match-winner at the absolute pinnacle of European football.

#1 Achraf Hakimi, Idrissa Gueye & Abdou Diallo
The arrival of Lionel Messi has given Paris Saint-Germain genuine hope that their wait for the UCL title is finally primed to end.

Both Gueye and Diallo should have big roles to play as Mauricio Pochettino’s side look to conquer the continent.

I didn't desire third term, I responded to plea of Guinean women - Conde