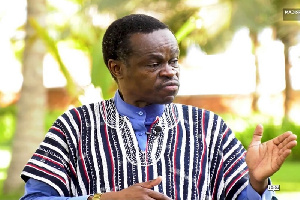 According to him, the President of Ghana in the beginning of his tenure of office had a foresight in uplifting the country to the next glassy in terms of industrialization and development but now the President turns to mismanage the country.

Speaking in a zoom interview with Maxwell Nkansah, Professor Patrick Lumumba also bemoaned on how he watched the parliament of Ghana seeking the approval of payment for presidential spouse.

He further stated that the demonstration by the Ghanaians youth on the street of Accra is evident that voters are anguish seeing the country become tough under the leadership of Akufo-Addo.

He said, the president still has the intellectual fire powers of leadership but things haven’t been the way he perceived to be.

He however added that, President Akufo-Addo still has the chance of correcting his errors by rebuilding himself to become the enhanced President the country needs.

“The problem with our leaders is that if you see good in them, they disappoint you very quickly and there is a sense that I’m beginning to feel disappointed in President Akufo-Addo,” Professor Lumumba stated.

Adding, “He started very well. He had ideas talking about industrialisation in every district, he said he will look for Ghana beyond aid. The rhetoric was right but now as I watch him consistently, I’m beginning to see a mismatch between rhetoric and action.”

“When I see Members of Parliament going to parliament and saying the President’s wife deserves an allowance then I know the man whom I thought had great ideas is now down the periscope. That is my unfortunate verdict as I speak,” Professor Lumumba added.