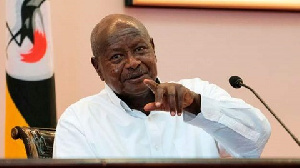 President Yoweri Museveni has condemned the coup d’état that happened in Guinea on Sunday, describing it as “a step backwards”. He said the coup leaders should face sanctions and “get out”.

“That’s unfortunate and it is a step backwards. Those military coups are of low value, we had them in the 1960s, and they were part of Africa’s problems. I condemn the coup, I don’t accept the idea of coups, they are not a solution,” he said in an interview with France 24’s Marc Perelman on Wednesday.

“They should get out, they should be told to go away because they are not a solution to problems of the country,” Mr Museveni added.

A former opposition leader himself who was at one point imprisoned and sentenced to death, Conde became Guinea’s first democratically-elected leader in 2010 and won re-election in 2015.

Conde won the controversial third term in that poll held in October 2020, but only after pushing through a new constitution in March 2020 that allowed him to sidestep the country’s two-term limit.

Dozens of people were killed during demonstrations against a third term for the president, often in clashes with security forces.

He was among the presidents that witnessed the swearing-in ceremony of President Museveni on May 12, as he extended his rule to four decades.

Celebrities whose ‘unusual’ body types made them popular

Thu Sep 9 , 2021
Spread the loveTweet• These celebrities won the hearts of Ghanaians with their unique body statures • They gained popularity by leveraging on the nature of their bodies • They have made money from their exposure There have been multiple instances where several Ghanaians have gained popularity overnight and this is […]