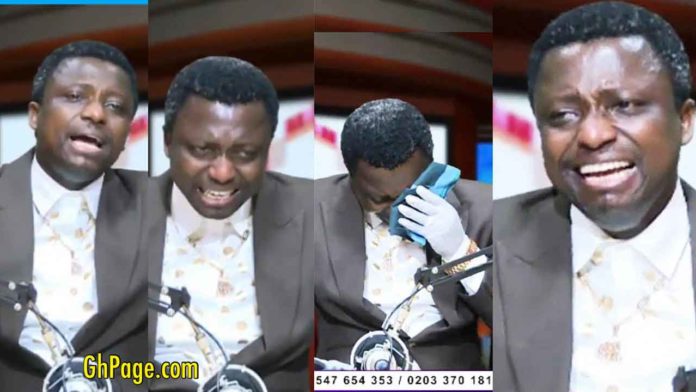 Controversial preacher Prophet Ebenezer Adarkwa Opambour Yiadom has landed into trouble with authorities at the Film Classification Committee (FCC) of the National Film Authority, for allegedly airing pornographic contents on his TV station, Prophet One.

The body in charge of content on TV is on the heels of the Leader and Founder of Ebenezer Miracle Worship Center for breaching Ghana’s film classification rules.

In a statement sighted by DGN Online, the FCC is asking the Prophet Opambour also known as Prophet One to provide documents for all his in-house contents by the close of day, Friday, September 10.

According to the FCC, Opambour broadcasted sexual scenes between a fetish priest and a person purported to be a client on his show. The content, it said is inappropriate for free-to-air television.

“The Film Classification Committee (FCC) of the National Film Authority has sighted pornographic content being shown on Prophet One TV. In this content, Ebenezer Adarkwa-Yiadom, also known as Prophet Opambour, played a TV host recounting a sexual incident between a fetish priest (male) and a woman purported to be his client. This content depicts patently lewd sensual scenes perceived by the FCC as inappropriate for free to air television,” the statement said.

“The FCC has publicly announced that all audiovisual content must be classified before exhibition. In furtherance to this, all broadcasting channels have been directed to classify in-house content according to the film classification criteria given. The FCC is requesting the management of Prophet One TV to provide the National Film Authority with the classification documents for all its in-house content including the pornographic content shown, by close of day on 10th September 2021,” it added.

If Opambour fails to comply with the film classification rules he shall be subjected to the Offences and Penalties in Section 27 and Forfeiture of Equipment in Section 28 of the Development and Classification of Film Act 935.

Video: Woman shocked after she was served with a man’s prick as meat at a TZ food joint