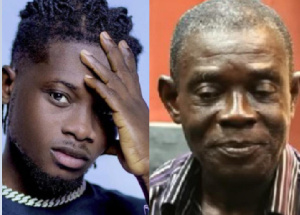 News of Mr. Boakye claiming to be the biological father of the Highlife singer has engulfed social media in recent times as he has made it known on several media platforms across the country.

His desperation and sudden interest to search for his ‘long lost son’ has attracted series of backlash from the public with some suggesting that he is only an attention seeker.

Others are also of the view that he is chasing after the Rockstar’s wealth hence his sudden decision to reconcile with him.

But refuting all of such claims, Nana Amaning Ankra II said:

“Kwame Eugene’s biological father, Kofi Boakye is my nephew. We were all in this town when he was born. We were witnesses while his mother was pregnant. I heard he declines to speak with his father any time he reaches out. That man is Kuami Eugene’s biological father. If there are any scores that need to be settled, we’ll settle it but if anyone says that’s not his father then it’s not true,” he stated in an interview with Kumasi-based R-TV which was replayed on Peace FM’s Entertainment Review show.

According to Mr Boakye, Eugene was christened after him but his mother later replaced it with her second husband’s surname ‘Marfo’.

The ‘Open Gate’ hitmaker on the other hand has denied knowledge of the man who claims to be his father.