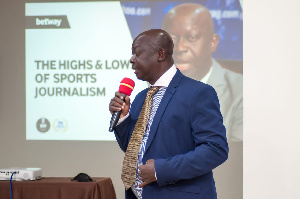 • Second from the late JEA Mills also for the same position

During the presidencies of former Presidents John Agyekum Kufuor and John Evans Atta Mills, Kwabena Yeboah was offered a deputy ministerial job and he declined.

According to him, he did not think that it is only through a ministerial position that an individual can play a role in this country.

Kwabena Yeboah told Nana Aba Anamoah on the September 1 edition of ‘Starr Chat’ that, “I do not think that you need to be a minister to play your role in this country.

“People can play different roles in this country without necessarily picking ministerial appointments and I do not think that ministers are mostly the important people.”

He said, people have viewed politics as a shortcut to riches therefore most people would like to go into politics just to amass wealth.

“In Africa especially, many people do not trust politicians because it is mind-boggling those personalities you knew a few years ago, enter politics and within a space of two – three – four years become millionaires. So, a lot of people think that if you are offered that position, you intend to go there and make some money,” he stated.

Kwabena Yeboah indicated that, his integrity was very dear to him and knowing the love Kufuor had for him, when he told him of his intention to bring him into his government to serve under Mallam Issah, who was then the Sports Minister, “I politely declined.”

The veteran journalist is of the view that, politics in Ghana is so toxic and something must be done about it.

“This creates an air of mistrust and suspicions which is not good for us as a people and I think politicians should do well and clean the act and to let the people believe that indeed they have come to serve and not to be ‘lord’ over them and that in Africa, politics has become a shortcut to success and if you want to be a millionaire, your best arena is not into teaching or journalism but politics,” Kwabena Yeboah stressed.

Thu Sep 2 , 2021
Spread the loveTweet• Police detectives have been tasked to take English language seriously • They have to resist the temptation of speaking Twi during court processes • According to the CID boss, speaking Twi instead of English is a disgrace to the Ghana Police Service Commissioner of Police Isaac Ken Yeboah, […]