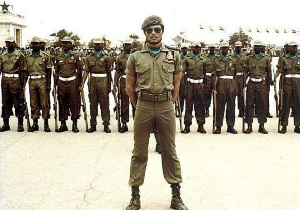 • The two are Burma Camp and state broadcaster, GBC

For a successful coup d’etat to be carried out in Ghana’s military intervention days, the plotters needed to capture two national installations – Burma Camp and the Ghana Broadcasting Corporation, GBC.

Burma Camp for abvious reasons, it is the seat of the military High Command but in the case of GBC because at the time it was the sole media establishment, unlike today where there is a proliferation of other private outlets – television, radio and online.

In the early years after Jerry John Rawlings’ second coming in 1981, military deployments in and around the state broadcaster increased significantly.

This is according to one man who was at the center of the action after he had been appointed Director General of GBC shortly after Rawlings took over – that man is Professor Kwame Karikari.

He said there were always rumblings within and outside of the PNDC about possible coup attempts: “… you know in those days if you had to make a coup d’etat, you must seize two places, Burma Camp and GBC. So GBC was in the eye of the storm all the time.

“So one time, I think it was in 1983 or so, I was in the office and there were soldiers all around GBC at the time, it was one barrack, there was a company which always guarded GBC and there were sand bags all over with guns trailed at the streets and people who were coming in,” he said.

Prof Karikari who left the GBC in 1894 narrated one such failed coup attempts which resulted in all staff present having to remain within the facility for 48-hours as soldiers exchanged gunfire with the coupists.

“So I was at the office when Warrant Officer Agyei Boadi, who was a member of the PNDC and who had been part of Rawlings’ cohort of coup makers rushed to my office with a couple of soldiers that some people are coming to attack GBC.

“So they stationed one soldier in front of my office and we heard shooting, this was in the afternoon, and the staff in GBC at the time, medical reports indicated that the GBC had the highest number of any corporate entity of heart conditions.”

He continued: “So Rawlings called me at this time on the telephone and said I should stay put, I shouldn’t go anywhere. Then I was there when Major Quashigah also rushed to my office and said they were doing something because there was this coup attempt.

He said it was after two days ”before things quieted down and they gave the order that we could go home.”

During the interview he also elaborated on Ghana transitioned from black and white to coloured TV in the mid eighties thanks to a Japanese loan as well as the underresourced nature of the broadcaster.

Has anyone pointed a gun to your head to donate? – Deputy MASLOC boss to critics

Mon Aug 2 , 2021
Spread the loveTweetAfia Akoto, the Deputy Chief Executive Officer of the Microfinance and Small Loans Centre (MASLOC) has hit back at critics of a recent fund-raising appeal for the National Cathedral. In a Facebook post, Afia Akoto took fault with critics of the initiative and criticized them for not being […]