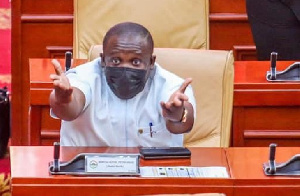 • Is IGP aware of speaker’s order not to arrest Sosu? Sam George

• Francis-Xavier led protest against bad roads in his constituency

Member of Parliament for Ningo-Prampram, Sam Nartey George, has lamented an attempt by the Ghana Police Service to arrest Madina MP Francis Sosu Xavier after the Speaker of Parliament had given a directive against his arrest.

Sam George in a Facebook post also quizzed the police’s motive to arrest Francis Xavier Sosu who was worshipping at a church in Madina on Sunday, October 31, 2021.

“Who are the Police Officers at the Church premises at Ritz Junction in Madina seeking to arrest the MP? Is the IGP aware of this order and what it means in the face of Mr. Speaker’s directives?” he wrote.

Sosu, a lawyer and legislator, led his constituents to demonstrate against the state of roads in the constituency.

During the protest on Monday, October 25, some police officers tried arresting the lawmaker for participating in what they described as an unlawful protest.

The youth however resisted his arrest while he (Sosu) fled the scene.

He later lodged an official complaint to Parliament on October 26, 2021, against the Accra regional police operations commander, Isaac Kojo Asante, for attempting to arrest him in line with his parliamentary duty.

He was also seeking the police chief and others to be hauled before the privileges committee for contempt of parliament.

Based on the complaint the speaker Alban Bagbin summoned the police to Parliament’s Privileges Committee over harassment of Madina MP.

The police are to answer questions before the Privileges Committee.

But on Sunday, October 31, 2021, however, some police officers stormed the church premises of the MP to arrest him.

Reacting to this development, Sam George vowed that the full might of Parliament’s Privileges Committee would be “brought to bear on their actions if they want a showdown”.

“We would respond in full measure and drastically! That is a promise!” he said.

VIDEO : My mom cursed me, my stay in Libya was terrible – 24-year-old Latifa

Sun Oct 31 , 2021
Spread the loveTweet• Lady shares harrowing story about a journey to Libya • Latifa Sulley left Ghana when she was 19 • She ignored her mother’s advice and travelled to Libya A 24-year-old lady, Latifa Sulley, has shared the story of how she landed in Libya despite a piece of […]