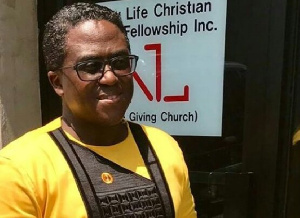 • Incarcerated in 1995, Gemann tells how life in prison was

• The musician says corpse well left unattended to on weekends

Ghanaian pop star Nana Kwasi Agyemang, popularly known as Gemann, has recounted some incidents that made his stay in prison horrible with one being a claim that corpses were left in the condemned cell for days.

Gemann was sentenced to death in 1995 after the court found him guilty of murder. He had shot and killed a taxi driver at Dome in Accra over a taxi fare. Gemann’s female friend, Nadia, had hired the services of the driver as he drove her to his [Gemann] house.

According to Gemann, the driver contradicted the female friend and refused to accept an amount of 3,000 cedis (now 3pesewas), insisting that they had agreed on 4,000 cedis (now 4pesewas). The driver left without the money but returned to collect a patch of sand from the house amidst threats, a move Gemann could not fathom.

Infuriated by the action, Gemann went into his room, picked a pistol, pursued the taxi driver and fired warning shots. After getting hold of the driver, an altercation ensued resulting in the killing of the driver. Although the court found him guilty, Gemann insists he accidentally pulled the trigger.

Now a pastor, Gemann in an interview with Christian Agyei Frimpong on Onua TV’s Anigye Mmere disclosed that the experience in prison is horrific.

According to him, inmates had no option but to sleep in the condemned cell with corpse on weekends if a colleague dies on a Friday.

“If a prisoner dies, a police officer has to take his fingerprints for verification. When someone dies, the corpse is deposited at the condemned cell. If the person dies on Friday and you draw the police officers’ attention, they won’t come for the corpse”, Gemann said.

“What that means is, we’ll spend the weekend with the corpse. It’ll be there until Monday. The corpse would decay and mess up the place. I experienced this so many times. I lost count.”

He, however, mentioned that he is informed the narrative has changed because “some human rights advocates fought against it.”

In a separate interview with Giovani Caleb on TV3, Gemann said expressed how he craves changes to be made in Ghana’s prisons.

“Prison is supposed to be a place of reformation. So, after five/six years of keeping somebody in jail, and that person doesn’t reform, then what is the point? Then it means there’s something wrong with the system”, he noted.

“Nobody cares about prisoners. So, nothing has changed. There are people in there who don’t have to be in there, and they are there”, Gemann added.

Thu Sep 2 , 2021
Spread the loveTweetItalian oil giant, ENI has sued the Government of Ghana in a London court after a former Energy Minister John Peter Amewu in April 2020 issued a directive to the company and Springfield E&P to begin talks and combine their adjacent oil and gas fields. Mr Amewu gave […]