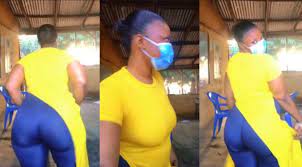 A female Junior High School (JHS) teacher has relegated GES (Ghana Education Service) code of conduct to the background by indulging in an act that could possibly get her into trouble.

In the video sighted on 360News, the woman whose backside is her distinctive feature positioned her phone camera and proceeded to shake her backside wildly in a typical ‘happy yourself’ fashion.

She recorded the video in a classroom probably at the time all the kids had gone out for a break. Watch the video below;

Away from that, a man was in for a shock when he suddenly appeared at the ‘scene’ to catch a man having s.ex with his wife on their matrimonial bed.

The story which is emerging from Kenya adds that the side-boy Kamau, who is said to be a cab driver, was caught red-handed ‘giving it’ to someone’s wife in his matrimonial home.

According to online reports, Kamau visited the married woman’s house, thinking that her husband was out of the town for work.

However, luck eluded him as the woman’s husband who has been trailing him for some time to satisfy his curiosity emerged at the scene and grabbed him.

The angry man reportedly stormed the scene together with his friends some of whom wielded a camera to capture the moment clearly and keep it as a piece of evidence.

“Who are you,?” the man of the house was heard asking Kamau while raining kicks and blows on him after he caught him in the act. Watch the video here:

See also  WATCH : I'm just like wow!’ - Tiwa Savage on receiving her own sextape from blackmailer

Tue Nov 16 , 2021
Spread the loveTweet A new study has suggested that every man should ejaculate at least 21 times within a month to avoid prostate cancer. The study looked at how ejaculation frequency affected prostate cancer risk over the course of 18 years. It found that men ages 20 to 29 who […]