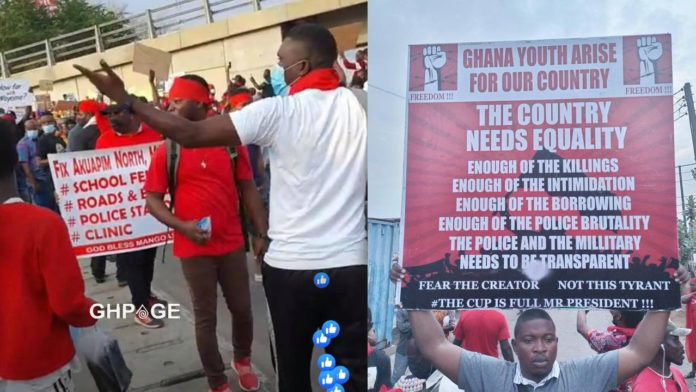 The much-awaited #FixTheNation demonstration is currently underway in the capital city of Ghana and thousands of Ghanaians have arrived from all parts of the country to partake in the demonstration.

As early as 4 am, some youth were already gathered at Obra Spot where the demonstration was scheduled to begin.

Not only the youth have been spotted at the demonstration, but some elderly people have also been seen at the grounds holding placards pleading/urging the government of Ghana to fix the country.

Some of the placards read:’How Far With Name, Fix Akuapem North, Ghana You Arise For Our Country, High Rate of Taxes; Lack of Jobs Please Help, Proper Education’ etc are some of the inscriptions on placards.

Watch Some videos from the scene below

Already similar demonstration has been held in the UK and Spain and it equally had many Ghanaians participating in the demonstration.

The convenors have revealed they plan on replicating the same demonstration in all major cities of the country.

Wed Aug 4 , 2021
Spread the loveTweet Sakawa boy enjoying with five Slay Queens These Internet scammers popularly known as Sakawa boys are making their best out of their short life span. From alcoholism, smoking, womanizer, and the flashy lifestyle, they are doing the most. But a new video that has surfaced online has […]