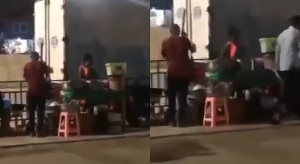 • A trader has been spotted pounding fufu along the Pokuase Interchange

• Food vendors have evaded parts of the road

A video making rounds on social media show how some food vendors have evaded parts of the newly constructed Pokuase Interchange.

Concerned citizens on social media have described the scene where a food vendor who sells along the pavement was captured pounding fufu (pounded cassava and plantain) along the Interchange very worrying.

At night, the stretch which was designed to be a walkway is transformed into a food joint where traders come out in their numbers to sell food including fufu.

Ghanaian Journalist, Afia Pokua who expressed disappointment with the development shared the video on her Instagram page with the caption: “Fufu on Pokuase Interchange? A nation that wants Ghana to be fixed but pounds fufu on an interchange. Is there hope for this country?”

In reaction to the post, some concerned Ghanaians have called on city authorities to as a matter of urgency drive away traders who transact business along the Pokuase Interchange.

“Honestly it’s cos all the laws are weak that’s why ……. there should surely be someone or an outfit to arrest and prosecute such people but what do we see? The center cannot hold so all things have fallen apart……, it’s not that in the western world people don’t misbehave…. probably they worse than us but their laws do not spare you in any way if you fall victim that’s why it seems they’re better off in behaviour than us……. if the system isn’t working you should surely see citizens misbehaving…… omg it’s a pity,” Saint Azimarito on Instagram wrote.

Another, Kwame Amoako added: “How can it be fixed, when people will queue and buy, we have a long way to go.”

A third person identified as Mr Tandoh added: “This is what gives them the right to say fix yourself…. Our problem is the fact that we are too subsistent in our thinking so we don’t see the need for order… anything goes. This one it is a common-sense problem… even the people passing by should be able to sack her…. But because we won’t think, we have to criminalise common sense issues.”

Tue Aug 31 , 2021
Spread the loveTweet  Armed robbers broke into Okorase fuel station, beat attendants, and made away with an unspecified amount of cash Monday dawn around 1:00 am on August 30, 2021. The manager of the fuel station, Delali Dzamposu, informed the police about the incident. He recounted that four armed robbers […]