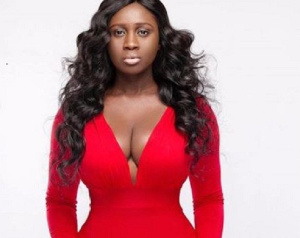 • Princess Shyngle has disclosed receiving death threats from her ex-husband

• Princess Shyngle parted ways with her ex-husband in April 2021

One would have thought that annulling her 3-months old marriage would have been the end to Princess Shyngle’s woes but that isn’t the case.

The actress has taken to Instagram on August 9, 2021, to narrate how her ex-husband has been issuing death threats after their divorce.

According to Shyngle, it has gotten to the point where her ex-husband identified as Bala Gaye threatens to send thugs to her parents’ house.

Sharing some inbox messages and voice notes which have since been deleted from her page, Princess Shyngle’s ex-husband was captured sending death wishes her way.

“I wouldn’t take this embarrassment for no one. We both die tonight. You gotta go. It’s the only way my life can be normal. I can’t wait till I get the news you’re dead.” These were some of the messages sent to her inbox.

It can be recalled that the actress in a series of videos shared via her Instagram Stories in April 2021, revealed that she had divorced her husband over domestic violence allegations.

The movie star shared receipts and audio recordings of her estranged husband confessing to domestically abusing her.

Wed Aug 11 , 2021
Spread the loveTweet  Hon Hadji Mustaphar…. ✍🏽 Once upon a time, there lived a gentleman, Dr Mahamudu Bawumia who was a Deputy Governor of the Bank of Ghana until his nomination as the vice presidential candidate of the New Patriotic Party (NPP) in 2008. According to Dr Mahamudu Bawumia, if […]

WATCH : ‘I will not marry again in my life’ – Xandy Kamel speaks on first failed marriage

‘We’re the monkeys, so no one respects AFCON’ – Evra on Ballon d’Or positions

I rather die than play for Real Madrid, Gerard Pique