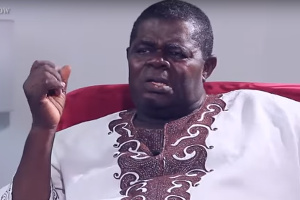 • TT was criticized by some individuals for undertaking such an initiative

Veteran Ghanaian actor, Psalm Adjeteyfio popularly known as ‘TT’ has lambasted individuals who have criticised his decision to seek public support to cater for his needs.

It can be recalled that a section of the public described the actor’s decision to solicit funds to secure his rent as embarrassing and a dent on his image.

This was after Vice President Mahamadu Bawumia and the Greater Accra regional minister, Mr Henry Quartey heeded to his call and provided him with some funds to enable him to foot the bills and his upkeep.

But responding to the trolls, TT said it is through no fault of his that he got struck with a disease with an expensive treatment that claimed all he had laboured for.

He has asked critics to keep their mouths shut if they don’t have anything encouraging to say to him.

TT who appears to be pained about the turn of events lost his cool and rained curses on his critics.

“If someone is going through some difficulties and you don’t know why, keep your big mouth shuts. It very annoying and painful. There are some things we call diseases. Do I invite diseases? So if at a point in life I get hit by a life threatening disease is it my fault? Disease takes away money. People build mansions but disease takes them all away. People buy cars but disease takes them all away so please know how to talk. If you don’t have anything to talk about, keep your mouth shut. I pray that to those of you who say all those stupid things, may the father send the devil to visit you, then you will know what it means to go through this,” he fumed in a viral video

Fri Sep 17 , 2021
Spread the loveTweet• Actor Psalm Adjeteyfio has appealed for funds to pay his rent • Ghana’s vice president and some benevolent individuals have donated monies to the actor • Comedian DKB has advised the actor to invest the monies he’s received Comedian DKB in a video posted on his Twitter page has advised veteran […]