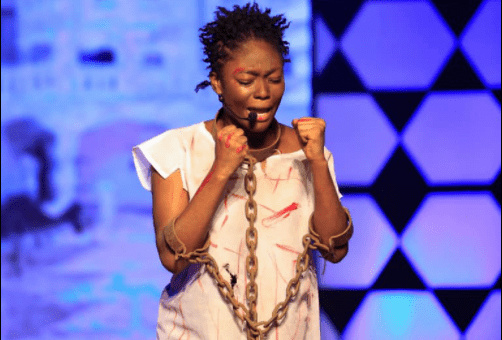 Mother of Edith Arthur popularly known as Kwansema who was a contestant for TV3 Ghana’s Most Beautiful (GMB) 2021 has made some shocking revelations.

The flagship program which seeks to showcase the talents of contestants has taken another dimension to the utmost surprise of those who listened to Cape Coast’s Kastle FM on Saturday.

Speaking to Amansan Krakye on the Kastle Entertainment Show, Kwansema’s mother revealed that her daughter suffered severally from spiritual attacks which affected her stage performances.

“It is true that what the ladies are doing on Ghana’s Most Beautiful goes beyond what we see in the physical realm, some of the ladies use juju.

“Kwansema has been attacked severally with juju which sometimes has affected her performance on stage. She told me about her ordeal after doing the Asafo performance.

“After attacking her spiritually and realizing that it has failed, some of her colleagues decided to attack her physically because some of the girls see her as a threat.”

Edith Kwansema Arthur who is a student at the University of Cape Coast, unfortunately, exited the competition after coming in last at the end of the previous week.

Thu Sep 23 , 2021
Spread the loveTweet Ghanaian politician Hopeson Adorye has disclosed the main reason behind the sudden disappearance and unexplained hiatus of Twene Jonas from social media. According to Hopeson Adorye who is currently in the US, Twene Jonas who works in a park has been sacked from his job because he […]