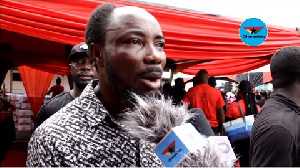 • Actor Big Akwes has alleged that his mother killed his father

• He said that his father died a miserable death

Ghanaian actor, Big Akwes, has made a shocking revelation. According to him, his “selfish” mother took the life of his father.

He alleges that his mother with the aid of a fetish priest in Nkoranza “killed” his father who was the owner of a big-time Pharmaceuticalpharmaceutical company.

The actor is quoted as saying: “My mother killed my father and took all his properties that is why I left home. When life started for me, I wanted to be like my father who was into the Pharmacy business but circumstances led me into acting.”

He explained that his mother together with his father’s driver sought the service of a ‘juju man’ who shot his father in the spiritual realm.
He added that at the time of his death, he was vomiting blood, however, his mother refused to seek treatment for her sick husband, but instead kept him under lock and key.

“I forced my mother to take my father to the hospital but she insisted she had already taken him when I got home. When I pushed further, she locked our main gate and took my father into their room and locked that door too. I jumped out of the house to get a Doctor but upon our return, my mother never opened the gate so I asked the Doctor to leave. My father stayed indoors for several days until he died a miserable death.”

See also  Video Of Counselor Lutterodt Playing With The Cl!t Of A Lady Live On Tv Goes Viral

“What saddened me is that when my father died, he was sent to the burial grounds in the boot of a taxi. A man who had wealth and was living his life in riches was reduced to nothing. Even providing a suit for him, my mother refused and therefore we had to buy some clothes for him,” is heard detailing in an audio which has since gone viral.

He added: “My mother took over all my father’s properties and did not give any to his family members. It was later after she took the driver who introduced her to the fetish priest in Nkoranza to another fetish priest to kill him that the driver told us all this.”Source: www.ghanaweb.com

VIDEO : We are facing hardship, have mercy on Ghanaians - Kwaw Kese tells Akufo-Addo on Father's Day

Sun Jun 20 , 2021
Spread the loveTweet• The world is celebrating fathers today, June 20 • The day is to appreciate fathers and men who are playing fatherly roles in the lives of people • Kwaw Kese has wished President Akufo-Addo a happy Father’s Day and has called on him to remember Ghanaians Musician, […]