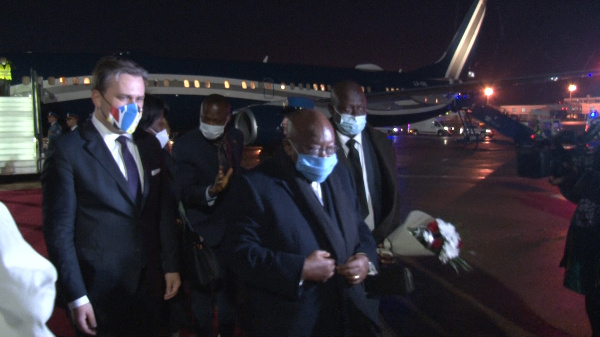 • He flew to Serbia over the weekend aboard a chartered jet

President Nana Addo Dankwa Akufo-Addo did not use the presidential jet for his trip to Serbia for the Non-Aligned Movement’s 60th anniversary.

The President and his entourage flew on a Boeing 737-900ER BBJ3 registered under the name LX-DIO luxury jet which he had previously travelled with to the United Nations General Assembly in September, according to North Tongu lawmaker Samuel Okudzeto Ablakwa.

Even though the presidency did not share photos of his departure from Accra or arrival in the Serbian capital of Belgrade, the Serbian Foreign Affairs Ministry shared photos of the arrival of Akufo-Addo on its Twitter handle.

One of four photos posted showed Akufo-Addo being received as he descended from the stairs of the Boeing chartered jet, another photo with a clearer view of the jet in the background shows the President being ushered to the arrival hall.

In a September 21 Facebook post, the North Tongu MP alleged that President Akufo-Addo travelled to the United States for the UN General Assembly summit aboard the same Boeing jet shown in Belgrade.

The blue and white LX-DIO’s features have not changed: 19-seater luxury jet which has a HEX code 4D0213 which is configured VIP, has 2x CFMI engines and was delivered to the current operators in November 2015.

As is now well known, this luxury monster comes equipped with multiple sections to guarantee exceptional comfort. It provides a VIP lounge for relaxation, Five-Star dining facilities, Royal Master bedroom, Cinema Room specially delineated for watching movies which is a separate accessory from other in-flight entertainment systems, and of course complete with a luxury shower.

Back and forth on presidential travels

The subject of presidential travels have become topical in recent months with the North Tongu MP accusing the government of spending on luxury at a time when the country grappling with a pandemic and struggling economy hard hit by the COVID-19 pandemic.

Ablakwa has alleged that three chartered trips by the President has cost the taxpayer about 10 million cedis despite Ghana having a presidential jet that is in mint condition.

The government last month, through the Director of Communications at the presidency, announced plans to buy a new presidential jet.

Whereas Defense Minister Dominic Nitiwul admits the current presidential jet, the Dassault Falcon 900 EXE, was functional he added in response in Parliament that it was not fit for purpose.

An aide to Vice President Mahamudu Bawumia, Gideon Boako, is on record as saying the President used the current jet for subregional travels and chartered jets for long haul travels, on the advice of the National Security.

Tue Oct 12 , 2021
Spread the loveTweet Controversial media personality Afia Schwarzenegger has asserted that many Ghanaian celebrities secretly smoke weed in the comfort of their home as she goes all out to expose them. In a new video posted to Instagram, the comedienne who once bragged about smoking GhS5,000 worth of weed every […]