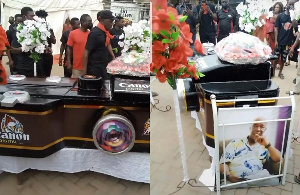 • He was buried in a camera-shaped coffin

Friends, sympathizers as well as celebrated Kumawood actors who graced his burial at the Accra Arts Centre witnessed him being laid in a camera-shaped coffin to symbolize his role as a filmmaker.

In Ghana and many parts of Africa, fantasy coffins remain a preferred choice for some individuals and families who love to bury their deceased in coffins designed to symbolise the job description of the dead.

Agya Manu, until his death, was regarded as one of Kumawood’s veteran actors who starred in major local movies.

Tue Aug 24 , 2021
Spread the loveTweetFriends and family of the late popular Kumawood actor, Samuel Manu also known as Agya Manu on Saturday, August 21, 2021, gathered at the Art Centre in Accra to bid farewell to the late actor. Agya Manu passed away on June 15, after battling an undisclosed illness. Among […]