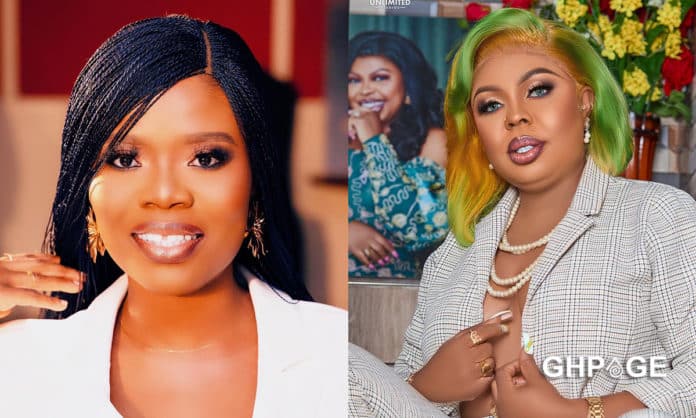 You can’t love Deloris Frimpong Manso -Delay less when it comes to how she manages and runs her ‘Delay Show’ especially her style of introducing the program to cherished viewers.

She introduces her TV show such that you’ll love to watch it to the end. The Delay show is one big platform where popular faces and names in Ghana are interviewed for fans to know them well.

Delay has once again delivered an epic introduction of herself on her show recently as she took a subtle swipe at Afia Schwarzenegger using wordplay and proverbial statements.

The astute presenter, over recent days, has not had it cool with Afia Schwarzenneger-another fierce media personality- as she finally responded to her and the other 2 (Tracey Boakye and Diamond Appaiah).

Delay praised herself as she gave a hard-knocking opening remark on the Show throwing subtle jabs at her critics with wordplay and proverbial utterances. Well, in a new video she has dropped more ‘bars’.

While touting herself as an Articulator car, she subtly compared Afia Schwarzenegger to a Tico car. The other remarks from her need an analyst to break it down to the understating of all.

List of MMDCEs recommended by the vetting committee out

Fri Sep 17 , 2021
Spread the loveTweet• List of recommended MMDCEs are out • This was after the vetting committee presented their report to President Akufo-Addo • President Nana Akufo-Addo has also presented to Dan Botwe, the final list for announcement soon The committee mandated to assess persons whose names came up for the […]